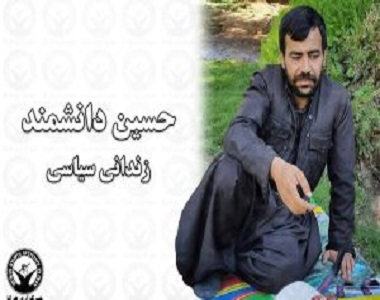 HRANA News Agency – Hossain Daneshmand, political prisoner of Sanandaj prison, was sentenced to 10 years in prison by branch number 4 of the court of appeal of Kurdistan province.
According to the report of Human Rights Activists News Agency (HRANA), branch number 4 of the court of appeal of Kurdistan province confirmed the sentence of 10 years of imprisonment of Hossain Daneshmand on May 29th.
This sentence had been issued in the primary court, by branch number one of the revolutionary court of Sanandaj in March.
Hossain and Hasan Daneshmand were arrested in August and October by IRGC forces in Marivan and Tehran.
Hossain Daneshmand was arrested for the first time on March 17, 2016 in a raid made by intelligence service forces to his mother’s house in Baneh town. His brother was also arrested for questioning the use of excessive force, threatening and usage of pepper spray.
These two brothers were released on the bail after few weeks of interrogation in May 2016; but again arrested after some time, this time by the IRGC.
Hossain Daneshman, 4, and border trader, and Hasan Daneshman, 43, and physician were respectively arrested on September 16, 2016 and October 22, 2016 in Marivan and Tehran and transferred to Sanandaj.
Even though the revolutionary court could not lay any charges against Hasan Daneshman, Hossain was charged with cooperating with conflicting Kurdish groups and espionage, and sentenced to 10 years in prison. Hossain Daneshmand who had many trips to Iraq’s Kurdistan territory due to his occupation, has strongly denied these allegations.
Need to be mentioned, he has been deprived of having a lawyer during the interrogation and judicial process of his case.