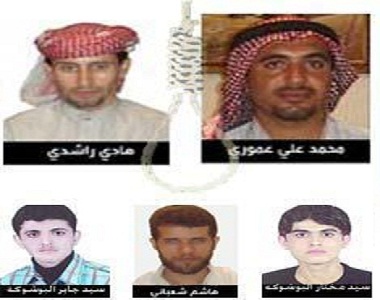 HRANA News Agency – The time of execution for five Iranian Arab civil and cultural activists in Ahwaz was determined by Judiciary System.
According to a report by Human Rights Activists News Agency (HRANA), A source in Judiciary System of Khuzestan told HRANA that their execution have been confimed by head of judiciary system, Amoli Larijani, for next week.
It should be mentioned that HRANA’s efforts to get confirmation of the report from their atorney are without result.
Five Ahwazi Arab men are convicted of waging war on God, sowing corruption on earth, propaganda against the Islamic Republic, and acting against national security.
The five men are: Hashem Shabaninejad (a poet, blogger, and teacher of Arabic literature), Hadi Rashedi (a chemistry teacher), Mohammad Ali Amourinejad (a blogger), Seyyed Jaber Alboshokeh and his brother Seyyed Mokhtar Alboshokeh.
The families of the prisoners being notified of the Supreme Court verdict on 9 January 2012, wich was issued by Judges Farajollahi, Gha’em-Maghami, and Lotfi.
According to the reports, the five men, who are all from Khalafabad (Ramshir), were arrested by the Ministry of Intelligence and National Security (MOIS) in Spring 2011. The same source indicated that these men were severely tortured. Hashem Shabaninejad is reported to be suffering from psychological disorders as a result of the harsh torture he has endured. Another man, Hadi Rashedi, has suffered a broken pelvis. A different source, who was detained by the Ministry of Intelligence and National Security (MOIS) in Ahwaz during the same period in connection to the same case, reported that he heard the voice of Hadi Rashedi as he was being tortured.
These five individuals have reportedly been forced to make false confessions. Two of the men, Hadi Rashedi and Hashem Shabaninejad, were featured on a TV show on Press TV, the IRI’s English-language satellite channel, confessing to their alleged subversive acts. Reports indicate that all five men gave these confessions under severe physical and mental torture. Despite serious doubts concerning the validity of these confessions, and despite the reported lack of credible witnesses, the trial court sentenced all five to death in July 2012 after over a year in detention. IHRDC posted a report on these five men after they were convicted.
Both international law and the Constitution of the IRI prohibit torture and forced confessions. Article 7 of the International Covenant on Civil and Political Rights (ICCPR), which Iran has ratified, states, “No one shall be subjected to torture or to cruel, inhuman or degrading treatment or punishment.” In addition, Article 14(3)(g) of the ICCPR expressly states that a prisoner cannot be forced to testify against him or herself or to confess guilt. Article 38 of the Constitution of the IRI prohibits torture for the purpose of extracting confession or acquiring information as well, and declares that all information obtained through torture and forced confessions is invalid.