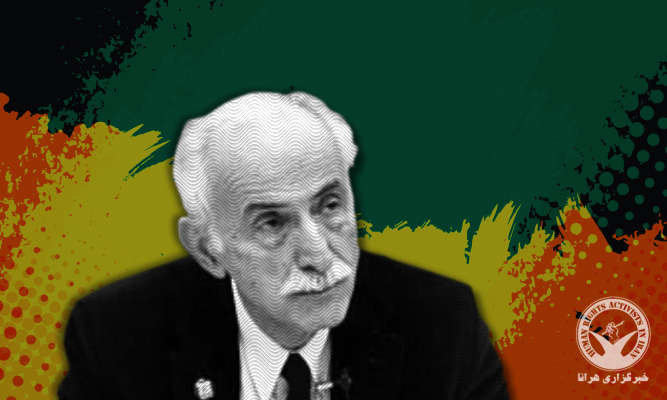 Peace Line Monthly – Dr. Abdol-Karim Lahiji has been devoted to Human Rights Activism for more than 5 decades. Two years before the Iranian revolution of 1979, in order to promote the Universal Declaration of Human Rights Mr. LAhiji funded the “Iranian Law Association” and “Iranian Association for Freedom and Human Rights”. After the 1979 revolution, he was one of the first to condemn the executions and other forms of human rights violations done by the new regime.

In the 58th issue of the Peace Line Monthly, on the occasion of the 10th anniversary of Human Right Activists in Iran (HRAI), we have asked Dr. Lahiji, the current president of International Federation for Human Rights (FIDH), for his opinion in regards to the performance of HRAI and the reason for the permanence and continued activism of this human rights organization.

– How do you describe HRAI and if it was possible to highlight a positive attribute of the performance of this group, what would it be in your opinion?

– Unfortunately in Iran political and civil activism don’t have a place, considering that, any group that could continue its activism despite all the problems such as prison and suppression, truly has done an important work. The human rights defenders’ society were officially and openly active two years before the 1979 revolution and for two years after the revolution, however eventually the regime put them under circumstances that they could not officially and openly continue their activism in the country. Subsequently the Centre for the Defence of Human Rights (CDHR) openly started its activism but unfortunately ended up with the similar fate, and these suppressions have continued to this day. In fact Mr. Abdol-Fattah Soltani and Mohammad Seif-Zade two members of CDHR are still imprisoned in Iran, and Ms. Sotoudeh who has been released after enduring 3 years of imprisonment, is under complete pressure and could be arrested again with any kind of activism. Under such circumstances, naturally HRAI couldn’t continue its official activism either.

The positive attribute of the organization is the authenticity of its news and activism, which is very important; even if the slightest false report is released, not only the activism would lose its value, but the government would also take advantage of it. In regards to HRAI, I have never come across a report or news that later has been proven to be false.

– As you mentioned, there are many difficulties and obstacles for the civil society and organizations that defend human rights in Iran; this results in many of these groups and organisations not being able to survive for long. With that being said; what do you think is the structural differences that leads to a perpetual existence of a human rights organization and its continued activism? In this regard, what difference could you mention specifically about HRAI?

– As you may know, human rights is a wide range of things, and it includes political and civil rights aspects as well as economic and cultural rights. In other societies there are many human right organizations, who are openly and freely active whether in pluralism and general level of human rights or in more specific areas of it, such as women’s right, religious minority’s rights, children’s rights, or opposing the death penalty. Well this is how it’s supposed to be.

Certainly in the societies that human rights organizations are under constant pressure and are not able to be active freely and lawfully, they would face more difficulties and are working under harsh circumstances, and they should be cautious in performing any kind of activism; extra efforts are needed in this extraordinary circumstances, for both gathering and realising the news.

I mean that human right activism should not be like political battles which unfortunately in many cases would use any resources to achieve their goals – whether or not rightful and authentic – (for instance the recent elections in March). The best guarantee for the permanence and continued activity of a human rights organization is that the public gradually realizes that the news released by the organization is truthful and authentic.

Human rights groups should not fight to replace a government; they should only fight against the violations of human rights by the government and in fact opposition with the government should not lead to exaggeration in delivering the truth. This has been an issue with some political groups during both the Pahlavi regime and the Islamic regime. For example during the eighties one week they would announce there are 30 thousand political prisoners in Iran and the next week they would announce there are 50 thousands of them. Obviously during 7 to 10 days it’s impossible to have a sudden increase of 20 thousands political prisoners in the country. I mean unfortunately they would take human rights activism hostage to their political battles, and in my opinion this negative aspect would lead them to exaggerate the number of human rights victims just because of their political oppositions to the government.

– Do you see the need for cooperation between Human right organizations? If so, why? How? And to what extend?

– Surely in such circumstances, cooperation and collaboration with other groups and organizations should not be neglected, and of course there will be competitions in any field but this competition should not in any way impede with cooperation. Cooperation could be as simple as, if HRANA* publishes a news in their own website, other websites and organizations republish the news, even if possible seek for more information and documentation on a particular news from HRANA. And of course as I mentioned before this is if the news is authentic and true.

– Is there anything you would like to tell the members and colleague who have been with HRAI in the past decade?

– As a person who has many years of experience in human rights activism, I’d like to say human rights groups should always continue trying to maintain their independence and to be sensitive and emphasize on the authenticity of their news. I also hope there will be a day that HRAI could openly and lawfully be active inside of Iran.

– Thank you for sharing your time with Peace Mark Monthly.