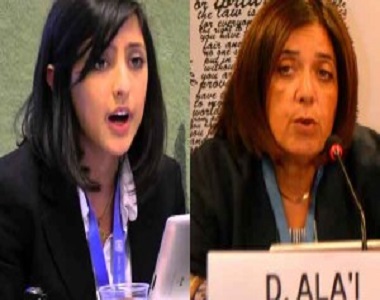 Peace Line Monthly – It is no secret that after the Revolution the civil rights of the Baha’is in Iran has been constantly violated. Today, these violations of rights have clearly attracted the attention of the international community and the civil society of Iran; such that a great portion of the reports on the violation of human rights in Iran includes the violation of Baha’is’ rights. However, this focus and attention has not always been the same and has increased during various decades after the Revolution. The highlight of the violation of Baha’is’ Rights in Iran as seen today, is certainly the result of many factors. In this regard Peace Line Monthly has interviewed Simin Fahandej and Dian Alai, the representatives of the Baha’i International Community in Geneva. Ms. Fahandej is currently the spokesperson of this international community. In this interview, the role of “Human Rights Activists in Iran (HRAI)” during its 10 years of activism in regards to the assertion of the Baha’is’ rights, has been discussed.

Could we consider the empowerment of the society and civil organizations in Iran and the increased knowledge and awareness in Iran’s society, as part of the factors that have led to increased attention towards the human rights violations of Baha’is in recent years in Iran?

Simin Fahandej: by looking back at about 7 to 8 years ago or even further back, it’s clear that the overall awareness about the concept of Human Rights has increased in Iran. In my opinion following the incidents of 2009, Iranian people realized that it’s not only certain people who are being oppressed. Indeed, even though Islamic Republic of Iran through propaganda in its media such as television and newspapers, has tried to draw an ugly picture of certain groups (specially the Baha’is) for the public, yet in the recent years, people have realized that the Baha’is are innocent and in fact, in Iran all those who think different from the government’s standards are oppressed. Regarding this, certainly the civil and human rights activism have had a great impact.

Dian Alai: absolutely! The civil society, Iranian human rights defenders and even the public have gradually grown more aware of the violations of the Baha’is’ Rights in the past three decades. Not only this shows a progress in the civil society and human rights society of Iran, but it also indicates the progress of the Iran’s society and people’s mindset, and this is a great outcome.

It’s the tenth anniversary of the “Human Rights Activists in Iran (HRAI)”. At the time of the establishment of this organization, addressing the Baha’is’ rights was either a taboo or had security risks, even amongst the independent organizations. Having that said, do you believe that HRAI has been successful in addressing assertion of the Baha’is’ rights in its one decade of activism, or even further in increasing the quality of the demands and society’s awareness?

Simin Fahandej: One of the most prominent features of the HRAI, is the fact that a group of activists in Iran decided to establish this organization because of the existence of injustice and oppression of Baha’is and other groups in Iran. In this regard, they did a lot in raising awareness, especially in the media, which is very important in two aspects; to show to the world and sympathize with those who are being oppressed in Iran, in order to prove to them that they are not alone, and the society has not forgotten them, and not only they are being mentioned in the media, but their rights are being defended at the general assembly. By looking at the history, one could see that the villainies of the past have always accrued in silence and darkness, and by exposing them to the world and raising awareness, definitely we are helping to improve human rights.

HRAI was one of the organizations to break free of the norms and was able to speak and raise awareness of the minorities and groups that perhaps were not addressed before.

Dian Alai: There were various groups before HRAI that bravely were raising awareness in this regard. Nevertheless the courageous activism of HRAI should not be forgotten; as it is one of the organizations which helped to break this taboo.

During this time, HRAI has proven that it is a responsible and dedicated organization, being concerned about Baha’is’ issues is a worthy proof of it. Indeed, in all of HRAI’s activism the fact that Baha’is rights violations are also human right violations, is clearly visible.

During the years of activism of HRAI, the presence and participation of Baha’i youth has been visible; a kind of rare collaboration that the Iranian regime did not hide its discomfort about it. In your opinion, what innovation and feature of this organization attracted the Baha’i youth to find it as a field for their activism?

Dian Alai: This should be considered from both sides. I think that the Baha’i youth themselves wanted to serve their country and to be active next to other Iranians in various fields. With this view, human rights or even women and children rights activism has been of importance to this group of youth, and subsequently being able to be active next to others in these fields. In the other hand, it should not be forgotten that organizations such as HRAI, accepted these youths and proved that they stand by their word in practice as well, and they want to see the Baha’i youth active in the society of Iran.

Simin Fahandej: Baha’i youth just like the rest of the youth living in Iran, are interested to serve their country and live in a country that human rights and freedom is respected. They want to be able to study, find jobs and start a family in the country they live in; simply, they want to live a normal life without the fear of expressing their believes.  When they are deprived of these fundamental rights, naturally they would look for a way to not only defend their own rights but defend others’ rights, too. By establishment of HRAI and other similar organizations, they created a field and a pavement so that many of those who are interested to be active in this field and are interested in defending the rights of others, could do so in an effective way.

Do you believe there is a hope that by the activism of human right groups without any discriminations, the overall human rights discourse in Iran would benefit? That is by bravely addressing the demands of those whose demands are taboo and addressing them comes at a cost, creating a universal discourse that benefits other oppressed groups and victims of human rights violations.

Dian Alai: There should be collaboration and participation for the progress of Iran in all areas, specifically human rights, and this is fundamental and should be paid a great amount of attention. Indeed the increase of this collaboration and participations, will have a positive effect on the Iranian society. Perhaps without this solidarity there would not be any progress.

Simin Fahandej: I believe this kind of discourse has begun a few years ago. At the conferences of the United Nations and the Human Rights Council that are held three times a year, when they speak to Iranian civil organizations, human rights activists and even journalists, it shows that, this kind of discourse has begun. What really matters now, and in fact is the next step to take in this direction, is that organizations, groups and people who with the common love for Iran are trying to improve the life of the people of this country, try to help the progress and improvement of Iran with unity, friendship, collaboration and consultation with one another (whether within or outside Iran).

Do you use the opportunities given to you as the representatives of the Baha’i community in the international community to represent and express the human rights violations and issues of other victim groups in Iran as well, or do you merely focus on the issues and problems of Baha’i community?

Dian Alai: No one can do any related work to human rights violations in Iran without speaking of the overall human rights violations. There are various issues in Iran that needs to be talked about. Of course, each group has its own speciality and can speak of specific issues, since they are more informed about those specifics. Having said that, the Baha’i International Community is no exception, and of course it speaks of the general human rights violations in Iran, for instance the violation of religious freedom and the religious minorities, but when it comes to details and individual cases, surely it can only represent and document those cases that it has full information about, meaning the Baha’is issues.

Simin Fahandej: Baha’i International Community presents and speak about the Baha’is in Iran at the UN General Assembly and Human Rights Council and various assemblies. But if possible and necessary, whether at the mentioned assemblies or any other meetings, would speak of other groups in Iran as well; because as I have mentioned before it is not only the Baha’is who are oppressed in Iran, other religious minorities such as the Christians and Jewish and other political minorities are being oppressed as well. Even though, the oppression against the Baha’is has been systematically and planned over more than the past 30 years.
We wish that one day we could see the Iran in which anybody with any belief could live in peace and harmony.

What would you like to tell the members and colleagues at HRAI after 10 years of activism?

Dian Alai: In my opinion, truly this general and all-around awareness regarding the human rights violations demonstrates the fact that we can all work together and sympathise, and be concerned about the issues of those who don’t hold our believes and religion. This has been a key factor regarding the activities of HRAI in the past decade, and as we discussed earlier, this will help the progress of Iranian society and brightens the future of this country. In fact it should be mentioned that, these activists hold no discrimination in their activism and are concerned about everybody’s issues.

Simin Fehendej: I would like to say, we know that human right activism is not an easy work, and therefore we thank them. Thank you for all the efforts and raising awareness during the past 10 years and we hope these activities would continue.

Thank you both for sharing your time with Peace Line Monthly.