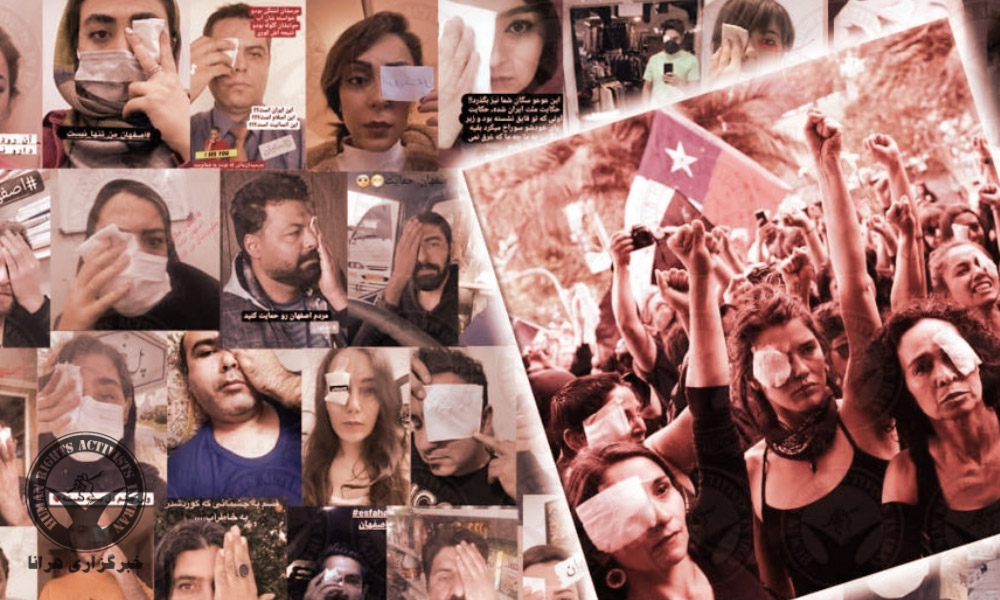 Several citizens have posted photos of their faces with bandages over their eyes as an act of protest against the Regime’s brutal crackdown in Isfahan on Friday, during which several were injured from the direct shooting of military and security forces.

According to HRANA, the news agency of Human Rights Activists, local doctors and medical staff have reported high numbers of patients in recent days. Official sources say that at least 19 protesters were injured last Friday, and two are reportedly in critical condition. However, the number of injured people are estimated to be significantly higher.

“In just one hospital, there were about 19 patients who were injured by shooting last Friday and Saturday. Therefore, with all likelihood, contrary to what official media have reported, far more than 19 people have been injured,” a specialist and eye surgeon in Isfahan told HRANA. “The distance of pellets on these patients’ faces indicates that they have been shot from a close range–maybe only a few meters. If the bullets are made of lead, even being hit from a 30-meter distance can cause irreparable damages.”

Military forces using pellet guns against protesters is by no means unprecedented. On February 3, 2018, during a protest of Gonabadi Dervishes in front of the home of their spiritual leader, Noor-Ali Tabandeh, security forces fired pellet guns at the protesters, after which several were injured and some even lost their sight.

Since the widespread use of pellet guns by Chile Police in 2019, which led to the injury of the eye injury of 445 people and permanent blinding of 34, the bandaged eye became a rallying symbol in Chile. Iranian protesters have also used this symbol to express their protest against the regime’s brutality.