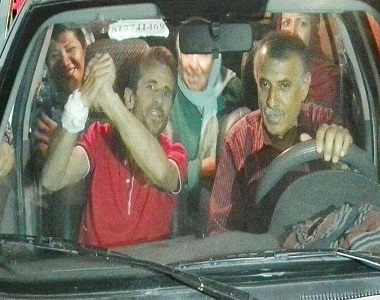 HRANA News Agency – Jafar Azimzadeh, imprisoned labor activist who was released on furlough after 64 days of hunger strike was hospitalized in Ateyeh hospital due to his critical condition.

According to the report of Human Rights Activists News Agency in Iran (HRANA), Jafar Azimzadeh who was released on furlough due to authorities’ promised for a retrial after 64 days of hunger strike was hospitalized in Ateyeh hospital due to his critical health condition.

On July 1, by on-going intestinal bleeding he also suffered serious stomach problems and his doctor announced that by continuing the hunger strike he would go into coma and there was also the risk of death.

The labor activist was one of coordinators of scroll of the petition signed by forty thousand workers to increase the minimum income. He has been sentenced to six years in total on charges of gathering and colluding with intention to act against the national security, disturbing public order and propaganda against the regime.

Azimzadeh’s charges were, the formation of the Free Union of Iranian Workers, the formation of the National Union of Dismissed and Unemployed Workers in cooperation with the Committee of Labor Unions, gathering in Laleh Park in 2009 at the International Workers’ Day, guiding the labors in a protest in 2005, constituting, planning and management of workers’ protests in 2014.

On November 8, 2015 according to the warrant of Branch 1 of Enforcement Criminal Court for the District 33 of Evin, for serving his sentence he showed up at prosecutor’s office in Evin prison and was transferred to ward eight.