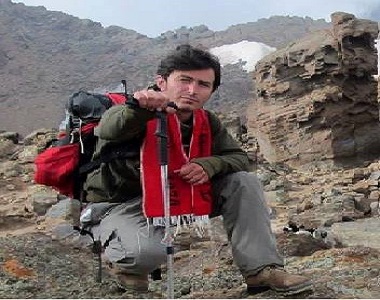 HRANA News Agency – Jafar Rostami Rad, civil rights activist from Astara, was sentenced to 6 months in prison.
According to the report of Human Rights Activists News Agency (HRANA), Jafar Rostami Rad, civil rights activist, has been sentenced to 6 months in prison by branch number 101 of the criminal court of Astara.
He has been charged with destruction of governmental properties.
Jafar Rostami Rad was arrested by the intelligence service of border security of Astara on July 14 at 9 am, and after primary interrogations, he was transferred to the court. He was released then on the bail from central prison of Astara.
Need to be mentioned, Jafar Rostami Rad was sentenced to 3 months and one day in prison and 30 lashes on charge of “clamoring and unusual movements in Yadegar Imam Stadium”, along with 18 others on branch number 104 of Tabriz on February 2015, after a soccer match between Al Jazire and Traktorsazi. The sentence is suspended for two years. Also, this activist was arrested during the Savalan ceremony along few others and was released on the bail, in summer 2014.
Jafar Rostami Rad is 27 years old and graduated from mathematics from Mohaghegh Ardabili University, and currently is the student of industrial engineering on PNU in Ardabil.