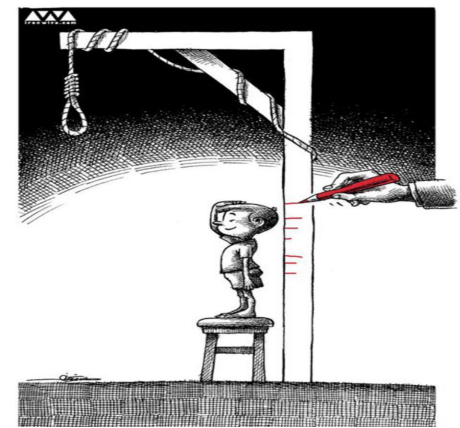 HRANA News Agency – Juvenile offender Baha’uddin Ghasemzadeh has been transferred to the Criminal Investigation Department in Urmia to be interrogated more.  His family fears for his safety as he might be tortured once again.  Despite his initial confession taken at age 15, Ghasemzadeh denied committing the murder at the trial, and the case against him appears to have many problems such as lack of motive.

According to a report by Human Rights Activists News Agency (HRANA), Ghasemzadeh was born on December 1, 1993.  On December 3, 2009, he was arrested at age 15 in Urmia, West Azerbaijan Province, for committing murder.

Ghasemzadeh was being held in Urmia’s Central Prison until nine days ago.  Although he was a minor at the time of arrest, the criminal court in Urmia tried and convicted him of murder.

“He was 15 years old when he confessed under duress and torture during interrogations at the Criminal Investigation Department,” one of Ghasemzadeh’s relatives, who spoke on condition of anonymity, says.  “But ever since, he has denied the charge time and again all the way through the course of the trial.  In spite of his denial and the fact that there are lots of holes in the case, the court convicted him.  For example, the crime scene has never been reconstructed, and there is no motive.  Even the prosecutor has spoken out and requested more investigations.”

“He categorically denies killing Azizeh Asadi, the victim,” the relative repeated.  “Nine days ago, they transferred him back to the Criminal Investigation Department.  We are worried that they are going to pressure him or even torture him again to get another confession.”