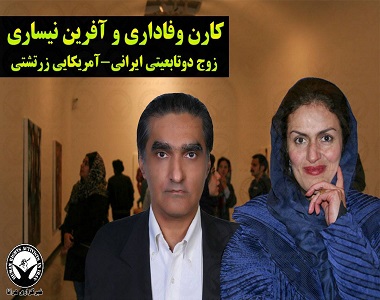 HRANA News Agency – Karen Vafadari and Afarin Neisari, Zoroastrian Iranian-American couple in the sixth month of their detention were informed of their security charges in Shahid Moghadas Court, in Evin Prison. In addition to “recruiting and introducing spies, and assembly and collusion against national security”, this couple has been charged with “showing and selling art works contrary to Islamic principles” in their gallery.
According to the report of Human Rights Activists News Agency in Iran (HRANA), Afarin Neisari, editor of “AUN Negarestan”, (Gallery of Contemporary Visual Arts) and her husband, Karen Vafadari, were arrested in Tehran International Airport, by Sarallah Guards, on July 20, 2016.
This dual nationality couple’s gallery was sealed, immediately after searching their house. The citizens were transferred to solitary confinement in ward 2-A, on charge of “acting against national security through espionage”.
After five months of detention, interrogation and prolonged solitary confinement in Evin Prison, they were transferred to general wards. Mrs. Neisari was transferred to the women’s ward and Mr. Vafadari was transferred to Ward 7 or 8 in Evin prison.
The Iranian-American couple were summoned to prosecution office in Evin and were informed of their charges of “recruiting and introducing spies, and assembly and collusion against national security”, and, “showing and selling art works contrary to Islamic principles”.
A source close to this detained couple, told HRANA’s reporter: “There is no document indicating those allegations and this arrest has been made only in order to achieve political goals and undermine any international action taken in the area of culture and art”.
It is noteworthy that not long ago, a group of the Visual Arts Union members issued a statement, and asked for informing people about the status of Karen Vafadari and Afarin Neisari.
The statement that has been written in the name of about 200 of artists and gallery owners, states: “As of today, about five months of arrest and detention of Afarin Neisari and her husband, Karen Vafadari, directors and founders of “AUN” Gallery and Cultural Foundation, and the closure of this centre of art and culture, passes. In the meantime, unreliable news, rumors and various kinds of gusts have been released regarding this incident, between arts and media people, which were associated with the people’s expectation, to clarify the situation.”
It is noteworthy that not long ago, Cateh Vafadari, Karen Vafadari’s sister, released a letter announcing the arrest of her brother and her brother’s wife by the Iranian Revolutionary Guards intelligence service, and called on Ayatollah Ali Khamenei, Iran’s supreme leader, to release the detainees. In her letter, she stated that during this couple’s detention they have faced “frame-up for financial extortion, seizure of the properties, and security threats”.
Karen Vafadari’s sister has explained in the letter that a day after their arrest, the officers handcuffed them and took them to their home, they took the art works from the walls of the house and destroyed some in the yard and seized the rest. Then they took these two to their gallery and then seized and broke up some of the art works and sealed the gallery.
Karen Vafadari, graduated in electrical engineering and management from New York University and was Alborz high school student. A’farin Neisari also graduated in architecture from Iran. Vafadari family has three children who all live in America. Karen Vafadari and his wife live in the area of Vanak village inTehran and their art gallery is called “A’n”, where was sealed by the officers after their arrest.
It should be noted, arresting foreign citizens especially who have Iranian-American dual nationality is sometimes influenced by the political situation between the two countries, as in the last event coincided with the nuclear deal between the two countries, a number of imprisoned Iranian-American citizens were used to compromise the relations between the two countries.