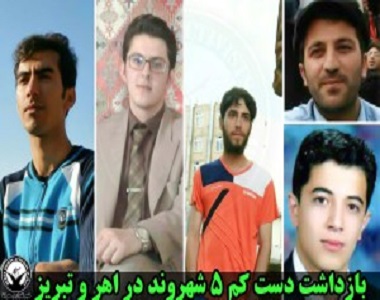 HRANA News Agency – At least four Turk (Azerbaijani) activists were arrested in the cities of Ahar and Tabriz in recent days and at the same time Rahim Zarei, another activist in Tabriz, was released from prison.
According to the report of Human Rights Activists News Agency in Iran (HRANA), Ibrahim Noori and Akbar Jahangiri, from Ahar were arrested and taken to an unknown location by the Intelligence Office in this city. They had refused to obey The Intelligence Office’s summoning, which had been made by telephone calls.
On the other hand, Milad Akbari and Ali Hamzehzadeh, from Tabriz, were arrested by security forces in the city of Tabriz and were transferred to an unknown location.
These five arrests have taken place while according to the reports; Rahim Zarei, Turk (Azeri) activist, who had been arrested 4 days ago, was released on the bail.
Among these detainees, Mr. Milad Akbari already had been arrested previously, too.
It is to say that there is no information regarding the reason of these arrests yet.