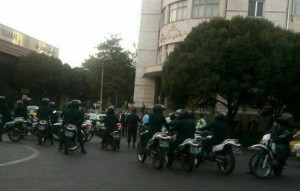 HRANA News Agency – 25 to 15 civilians who were arrested during the protests which were held in the past few days in Tabriz and Uremia have been released. However, at least 7 others are still under arrest.

According to the report of Human Rights Activists News Agency (HRANA), during the protests of Turk (Azeri) civilians regarding the racial subject that was published in Tarh-e-No newspaper, in Tabriz and Uremia cities, many were arrested, 15 to 25 of whom have been released on the bail. However, at least 7 others are still under arrest.

Seven activists including Reza Solimazadeh and Majid Haghverdi, who were kept in intelligence service detention centers were transferred to Tabriz prison today.

Oyan News has reported the arrest of Roghayeh Alizadeh and her detention in Tabriz prison.