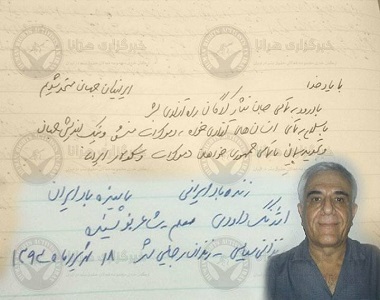 HRANA News Agency – Death row Political prisoner, Arjang Davoodi, explained in a letter sent from prison about the unlawful confiscation of his house by National Intelligence and Judicial organisations.
According to the report of Human Rights Activists News Agency (HRANA),  Arjang Davoodi , a Political prisoner who is on the death row has sent a letter from the prison (a copy was also sent to HRANA) and described his life and current living condition at prison.
In this letter, Mr Davoodi refers to suffers he faced during his imprisonment and says: “I was kept in a tight and dark cell at Ward 2-Alef at Evin Prison which belongs to the Guardians of the Islamic Revolution Army (SEPAH) back in 1993. During the 109 days I spent in solitary confinement I was mentally and physically tortured but they couldn’t get what they were looking for from me. I was hospitalised three times at Baghiyatollah Hospital located at Mollasadra Street (belongs to SEPAH) during this period under different names such as Mohsen Ghorbani, Mohammad Ashoori and Khoshro Abadani.”  He Continues: “after 12 years imprisonment, torture and exile, they farmed me up, by creating further cases with no logical grounds. These cases were piled up against me without providing any physical or imaginary evidence, accounts or witness and led to the death sentence for me.”
While Mr Davoodi explains that he believes in peaceful campaigns in this letter, he also points to the confiscation of his belongings and property by National Intelligence and Judicial organisations and provides accounts about the unlawful occupation of his Father’s house (the house trusteed to him by his father). “…they didn’t spare my old socks and shoes!? They sold all carpets, fridge, air conditioning unit and the rest of the furniture and took everything. My father’s family live in the United States and I was safekeeping their documents.  National Intelligence and Judicial organisations took these documents and used fraudulent deeds to sell the house which was the only place I had to work and to live.
Arjang Davoodi, an aged Political prisoner has served his first 10 years imprisonment sentence but he was framed-up by Security and Intelligence Organisations and received another 20 years and 8 months imprisonment sentence. He later received a death sentence at Branch 1, Karaj Islamic Revolutionary Court on the charges of “Membership and active support of People’s Mujahedin of Iran party (MEK) at prison.”