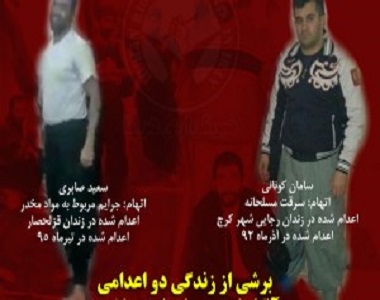 HRANA News Agency – In this footage, two prisoners are wrestling with each other, one of them was executed two years ago, and the other one was hanged in Ghezelhesar prison a few days ago. This footage shows their hope for a survival.

According to the report of Human Rights Activists News Agency (HRANA), Said Saberi was charged with possession of drugs who along with nine other prisoners,  was hanged in Ghezelhesar prison a few days ago (July 17).

The other prisoner, Saman Konani who was sentence to death on charge of armed robbery, was hanged in Rajai Shahr prison earlier in 2014.

HRANA does not promote crimes; the aim of releasing this footage is defending the right of life and opposition to restricting it.

The following footage narrates the moment that the prisoners hoped for life and a future and were unaware of their executions.

HRANA hopes to attract the public attention by publishing such videos which narrate the forgotten prisoners’ lives behind the walls.

This footage has been recorded in Rajai Shahr prison in 2013.