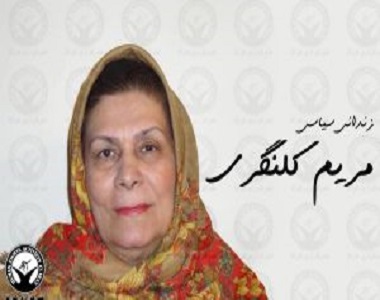 HRANA News Agency – Maryam Kalangari, 65, was arrested by the law-enforcement officers and transferred to the central prison of Arak on January 13. Mrs. Kalangari had already been sentenced to 5 months imprisonment by a court. Three other members of the Kalangari family, Bijan Kalangari, Mojtaba, and Meghdad Fouladi, were sentenced to three years imprisonment each. Kalangari’s family is among the families of survivors of the massacre of political prisoners in 1980s.

According to the report of Human Rights Activist News Agency in Iran (HRANA), Maryam Kalangari, 65, was arrested by the law-enforcement officers and transferred to the Central Prison of Arak on January 13, 2018.

An informed source, by confirming this news, told HRANA: “The agents arrived at the house of Mrs. Kalangari in Arak, and transferred her to the Central Prison in Arak, despite the fact that she was severely ill.”

The source added: “Mrs. Kalangari had previously been sentenced to 5 months imprisonment on charges of propaganda against the regime by Arak Revolutionary Court. This Araki citizen is suffering from variety of diseases, including cardiovascular and pulmonary diseases, osteoporosis, and enduring the prison conditions is very difficult for her.”

Regarding Mrs. Kalangari’s condition, the source added: “Despite the words of the head of the Arak Prison and his emphasis on the lack of facilities for keeping Mrs. Kalangari, and the forensics’ order on her intolerance of prison conditions because of numerous physical problems, the authorities still avoid to release her or convert the imprisonment it to an alternative sentence.”

It should be noted that Bijan Kalangri, brother of Maryam Kalangri, 60, who was political prisoner in 1980s, and two children of Mrs. Kalangari, named Mojtaba Fouladi, 40 years old (Bachelor of Accounting) and Meghdad Fouladi, 35 years old (Bachelor of Management) were arrested by Arak Intelligence Office on July 26, and after a process, they were initially sentenced to 10 years imprisonment, each.

After appealing, the verdict was reduced by the Appeal Court of the Markazi Province to three years imprisonment for each of these citizens on charges of gathering and collusion against national security.

These three political prisoners were transferred to the Central Prison of Arak at the end of the interrogation phase, On August 6.