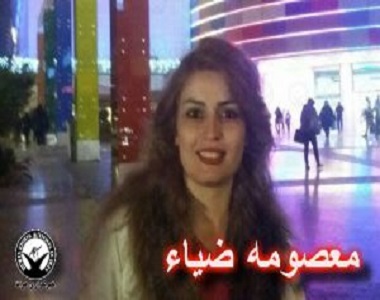 HRANA News Agency – Tehran court of culture and media, issued a one-month detention order for Masoumeh (Pegah) Zia and the interrogator has informed her family that that should immediately hire a lawyer for her. Ms. Zia was arrested in Tehran Imam Khomeini airport while returning from a trip abroad.

According to the report of Human Rights Activists News Agency in Iran (HRANA), Branch two of Court of Culture and Media in Tehran, has issued an arrest warrant for a month for Masoumeh (Pegah) Zia.

When her mother attended this judicial place, the case interrogator asked her to hire a lawyer as soon as possible.

A member of Zia family told HRANA’s reporter: “Pegah has written an objection letter to this detention order and still has not received any answer to this objection. On the other hand, her mother had asked the interrogator about her charges and the reason of her arrest, but they said, ‘we have told her and there is no need to tell you, too.’”

This family member, regarding Masoumeh Zia’s whereabouts, also said: “One day after her arrest, Pegah called her daughter, but she had not said anything about her whereabouts. However, we have found out that she is being held in Evin prison and probably in ward 209.”

It is noteworthy that Masoumeh Zia was arrested at the airport when she was returning to Iran. Couple of hours after the arrest, security officers went to her house along with her, and searched it, and then took her electronics-communication gadgets with them. According to the officers, a news case has been opened against her.

Masoumeh Zia was arrested during the rally by the supporters of Erfan Halgheh in front of the Revolutionary Court, then she was tried by a court, presided by Judge Ahmadzadeh, on February 7 and was sentenced to endure one year imprisonment and 74 lashes, on charge of disturbing public order by participating in illegal gatherings.

The sentence of one year imprisonment and 74 lashes, for Masoumeh Zia, was upheld precisely the by the Court of Appeal.

She, along with 15 other educators of Erfan Halgheh, were sentenced to 37 years imprisonment in total, during various trials in February 2015.

Ms. Zia previously had been sentenced to one year suspended imprisonment when she was arrested in 2006, with the charge of participating in a peaceful gathering on June 12, 2006, which was held with the aim of changing the discriminatory laws against women.