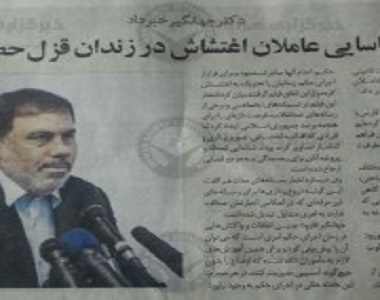 HRANA News Agency- in his interview with Fars News Agency reporter, “Asghar Jahangiri”, head of “State Prison, Security and Corrective Measures Organisation of Iran” mentioned that they have identified, pictured and published the pictures of the prisoners behind the recent riot at Qezel Hesar Prison .However, well informed sources claim that Intelligent and Security Unit of Qezel Hesar Prison initiated mass arrests at this prison to cover the riot incident and its after effects. Some of those arrested has no relation with the riot and have been arrested with no clear reason.
According to the report of Human Rights Activists News Agency (HRANA), mass arrests took place after the reports of the riot at Qezel Hesar Prions -in which the prisoners condemned the Death Penalty – widely published and the video of the incident went on HRANA website back in August. Consequently, Intelligent and Security Unit of prison was forced by higher authorities to initiate mass arrests among the prisoners of Units 1 and 2 at Qezel Hesar Prison and transferred them to solitary confinement. These arrests were made to terrorise and to create a state of panic amongst the prisoners who were seeking their basic human rights.
It is not clear that if these punishments are directed by Disciplinary Committee of the prison or governed by Judicial Authorities outside of the prison. However, well informed sources told HRANA reporter that Intelligent and Security forces arrested even those who were on holiday leave during the riot or those from other units not involved with the riot. Numbers of arrests are imprecise yet but it is estimated that 20 to 32 prisoners have been arrested with regards to this.
In his interview, Mr Jahangir spoke about the punishments for those responsible and involved with the riot while at least 10 to 14 prisoners were hanged at this prison after the incident.
In the morning of 17 August, 2014 at least 14 death-row prisoners were transferred to the execution chamber at Qezel Hesar Prison. This resulted in a riot by prisoners of Unit 2 at this prison which is mostly consisted of death-row prisoners. These prisoners confronted the prison Security units demanding the executions to be stopped.
Although it was claimed by the head of State Prison Organisation that Security forces are well trained, live rounds and tear gas widely were used by Qezel Hesar Security and back up units which resulted in lots of injuries and at least 10 causalities.
HRANA also reported about the peaceful protest of prisoners’ families outside the prison on the same day who demanded suspension of executions and condemned the Death Penalty. However, these protests were suppressed by NAJA using Water Cannons and led to several arrests.