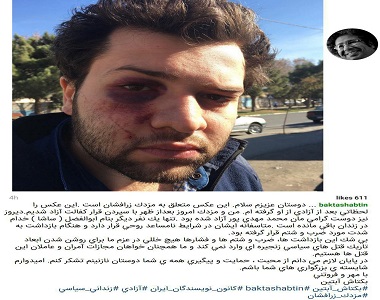 HRANA News Agency – On December 4, Mazdak Zarafshan and Bektash Abtin who had been arrested during the anniversary of the victims of serial murders, were released on the bail.

According to the report of Human Rights Activists News Agency in Iran (HRANA), on December 4, Mazdak Zarafshan and Bektash Abtin were released on the bail.

It is worth mentioning that during the anniversary of Mohammad Mokhtari and Mohammadjafar Poyandeh, the victims of serial murders, at least 6 people were arrested and some of them were beaten and threatened. The detainees were released later. On November 3, 2016, HRANA had reported that Mazdak Zarafshan while trying to stop the onslaught of the security men to Ms. Fatima Sarhaddizade, 75, was beaten and arrested along with at least five other civilians named Bektash Abtin, Mohammad Mehdi Pour, Mazdak Zarafshan, Nasser Zarafshan and Reza Akvanian.