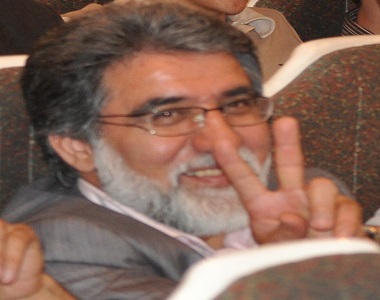 HRANA News Agency – While Mohammad Reza Moghayse the head of following up committee on victims of 2009 election incidents, has spent all his four years imprisonment verdict the judicial officials are not releasing him yet.

According to the report of Kalemeh website, Mohammad Reza Moghayse is one of the veterans of Iran-Iraq war and was member of Mir Hossein Mousavi’s main campaign office. He was arrested on October 14, 2009 and transferred to ward 209 of Evin prison, his furlough was granted after 50 days of being under arrest on March 3, 2010.

His 700 million bail was confiscated temporally to go on furlough but in November 2010 the security forces raided his home and workplace and arrested this political prisoner on charge of being deserter and transferred him to ward 350 of Evin prison.

According to the same report now his imprisonment period is over and despite of the judicial warrant on his freedom from prison, the attorney beleived that he was a deserter and has to spend all the furlough time in prison in compensation.

Moqayesseh declared lately that if the attorney will oppose his freedom unlike the law then he will try to protest in any possible way such as sending letter to the high rank officials and unlimited hunger-strike.