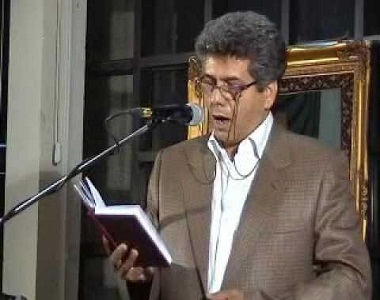 HRANA News Agency – Mohammadreza Alipayam (Haloo), imprisoned poet and satire columnist was transferred to prison clinic because of injuries on his head and bleeding and then was transferred to Imam Khomeini hospital in Tehran. This prisoner’s head was healed with eight stitches because of injuries and he said that he did not remember anything because of being unconscious.
According to the report of Human Rights Activists News Agency in Iran (HRANA), Mohammadreze Alipayam is being held in ward 2 of Rajai Shahr prison.
Ward 2 of Rajai Shahr prison known as Darolqora is especially for prisoners who will get benefits such as vacation and forgiveness by memorizing and reading the Quran and performing religious ceremonies. Despite Mr. Alipayam, a number of other political and conscience prisoners are also being kept in this ward.
Mohammadreza Alipayam known as Haloo, who has a history of numerous arrests, last year was sentenced to 1 year and 3 months and 1 day imprisonment by Branch 26 of Tehran’s Revolutionary Court, presided by Judge Pirabassi.
He was charged with propaganda against the regime, insulting religious sanctities, insulting Ayatollah Khomeini and the Supreme Leader and insulting the president and other officials, and the reason of all the charges are his poems.
Mr. Alipayam introduced himself to Evin prison to endure his imprisonment in April 2015. He was first sent to ward 8 of Evin prison and then transferred to Rajai Shahr prison.