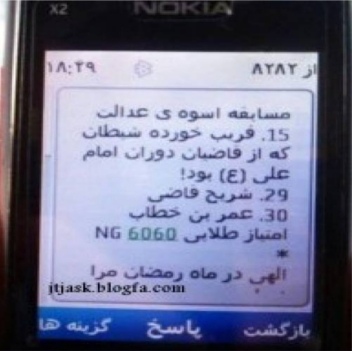 HRANA News Agency – Following a message broadcast by Irancell, the Sunni community in Iran was deeply offended, and 160 Sunni political prisoners went on hunger strike in Rajai-Shahr Prison.  The hunger strike began on Saturday, July 20, and will last for two days.

According to a report by Human Rights Activists News Agency (HRANA), the message included a question that asked customers to identify the instrument of Satan who was a judge and the contemporary of Imam Ali.  The name of Sunni leader, Umar, was one of the possible answers.
“This contest was planned and intentional,” one of the Sunni political prisoners said.  “Irancell is owned by the Revolutionary Guard.  We ask all Sunni leaders not to give up easily this time.  A simple apology isn’t good enough anymore.  We must protest until everyone who has planned and backed this contest is dismissed.”
Irancell was previously boycotted for a similar incident.  The online campaign was then called off after the company formally apologized to the Sunni community.
The Public and Revolutionary Prosecutor of Zahedan in south east Iran has filed formal charges against the company’s CEO for disturbing the peace and defamation of religious beliefs.