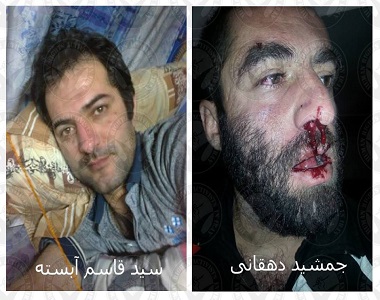 HRANA News Agency – Two Sunni prisoners of conscience in Iran who had been transferred to hospital on Tuesday after a deterioration in their condition were prevented from receiving medical treatment by officers in charge of their case.

According to the report of Human Rights Activists News Agency (HRANA), Jamshed Dehghani and Ghasem Abesteh were transferred from Rajai Shahr prison to the Imam Khomeini hospital in Tehran on 16 December 2014.

However, the officers accompanying them prevented them from receiving medical treatment once they arrived at the hospital, and the two men were transferred back to prison without explanation.

Ghassem Abesteh has been suffering from a kidney illness for months. In August 2014, despite suffering from a severe kidney infection that left him confined to bed and unable to carry out daily activities, prison officials refused to transfer him to hospital and instead just issued him with painkiller tablets. Jamshed Dehghani is suffering from an undiagnosed illness.