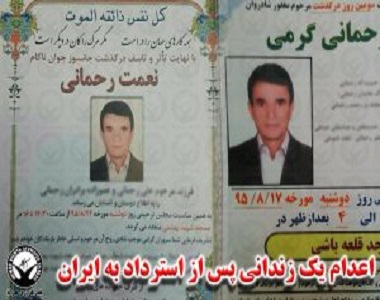 HRANA News Agency – A prisoner identified as “Nemat Rahmani Gerammy” was delivered to Iran about two months ago after serving 15 years in the prisons in Azerbaijan Republic. Mr. Rahmani was executed shortly after his extradition to Iran.

According to the report of Human Rights Activists News Agency in Iran (HRANA), “Nemat Rahmani Gerammy” to coincide at the same time with the visit of Iranian President to Azerbaijan was extradited to Iran in August 2016 after serving 15 years in prison.

Shortly after his extradition on November 4, he was hanged in the central prison of Ardebil. His body was delivered to his family.

His exact charges are unknown so far. Various sources have announced various charges including illegal possession and transportation of weapons and security-related charges, but HRANA is not able to independently confirm the charges and details of the case.

Mr. Rahmani, who was a citizen of Iran, escaped to Azerbaijan 15 years ago, but for unknown reasons he was sent to prison there and was sentenced to 15 years.

It should be noted that Iran and Azerbaijan have signed an extradition treaty with each other.