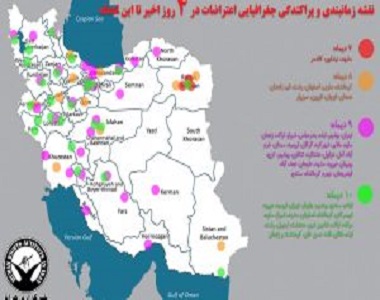 HRANA News Agency – The mass-protests continued on the fourth day in various cities of Iran. Protesters, who had protested in the early days due to financial problems and bad economic conditions, criticized the country’s leaders including the Iranian leader and the ruling system in addition to economic system and strongly chanted slogans against it. On December 31, 2017, protesters showed a significant street presence in at least 24 cities in Iran. Reports indicate that hundreds of citizens were detained and at least two protesters have been killed in recent protests.

According to the report of Human Rights Activists News Agency in Iran (HRANA), the rallies which have begun on the pretext of economic and administrative corruption, continued in many Iranian cities on the fourth day of the protests.

Protest rallies were drawn to violence in some cities, the situation was full of tension and aggressive on December 31, 2017 in Duroud where witnessed the killing of two protesters on December 30, 2017.

Protesters attacked public places, including one of the police stations and a Basij Resistance Base and burned there in some cities such as Delfan and Shahin Shahr. Nevertheless, the main protests in Iran continued without violence.

The protests continue as the government tries to filter the social networks and messengers, including Instagram, WhatsApp and Telegram, to control the situation on December 31, 2017.

The videos show that protests continued until midnight in some parts of Tehran. Following the rise of protests, in addition to filtering, the cell phone operator of “Hamrah Aval” was cut off for hours in some parts of the country due to the active role of the networks.

The authorities, in addition to informing two deaths in Dorud, gradually provided more information about hundreds of arrested civilians. At the same time, it is reported from Evin prison that prison authorities had prepared a certain place for accepting a large number of detainees by evacuating the halls of prison.

The slogans were not limited to economic demands and protesters chanted slogans against the Iranian regime, including Ayatollah Ali Khamenei on December 31, 2017.

The judiciary and security officials have not provided comprehensive statistics of the detainees. However, Tehran prosecutor had informed the arrest of a number of protesters in Tehran, without mentioning the number, in the meeting of Council of Deputy Prosecutors of Tehran on December 31, 2017.

In addition, deputy security police of Tehran governorate told Ilna about the arrest of 200 people in the gatherings in the central regions of Tehran on December 30, 2017, that about 200 people, who had the intention of engaging and destroying the properties, were arrested in Enghelab and Valiasr district on December 30, 2017. He added that these people were under the authority of the judiciary while others were released by ruth. There were also several arrested students who were released; some of the students’ families were in front of the university.

Ali Asghar Naserbakht also said that the total number of “leaders who were arrested in the illegal gathering on December 30, 2017, was about 40.”

Also, HRANA’s reporters were informed that at least 4 people were arrested by security forces in Dehdasht on December 31, 2017. Bahman Tafazoli Nasab and Behnam Ghaedi are two of them.

The Police Chief of Robat Karim also informed the arrest of a person named (R. E) who released the call for the protest rally on Instagram.

Alireza Radfar, Deputy Governor of the West Azarbaijan also said on December 31, 2017, that ten people, who intended to stimulate people, were arrested in this province.

On the other hand, Jawad Karimi Ghoddoosi, the MP from Mashhad and Kalat told Alef’s reporter about the arrest of several people protesting to the economic situation in Mashhad. Even so, officials have already reported the arrest of 52 people during the Mashhad protests.

Golestan Province Broadcasting reported that about 40 of the leaders and main elements were arrested in gathering in Gorgan on December 30, 2017, that two of 2 detainees had come from Tehran to Golestan province.

In addition, at least 80 people were arrested and 4 were wounded on December 30, 2017, in the aftermath of violent attack and beatings of protesters by security forces in Arak. However, on December 30, 2017, following the continuation of protests, Ali Aghazadeh, Governor of Markazi Province said that 100 people had been arrested during recent unrests, that is unclear whether it was about protests on December 30, 2017, or the provision of large-scale statistics from the last few days in the area.

HRANA reported on December 29, 2017 that at least three students from Zahedan, Amin Rezai, Omid Arsalan Pejman and Yasin Mirzai were arrested by the police following the protests in Zahedan.

Since December 29, 2017, people in many cities have gathered in Iran to protest against the bad economic situation. Security agents used tear gas and water cannon against protesters.

The following video report is a summary of 73 videos of protests in various cities on December 30, 2017, which have been verified by HRANA.