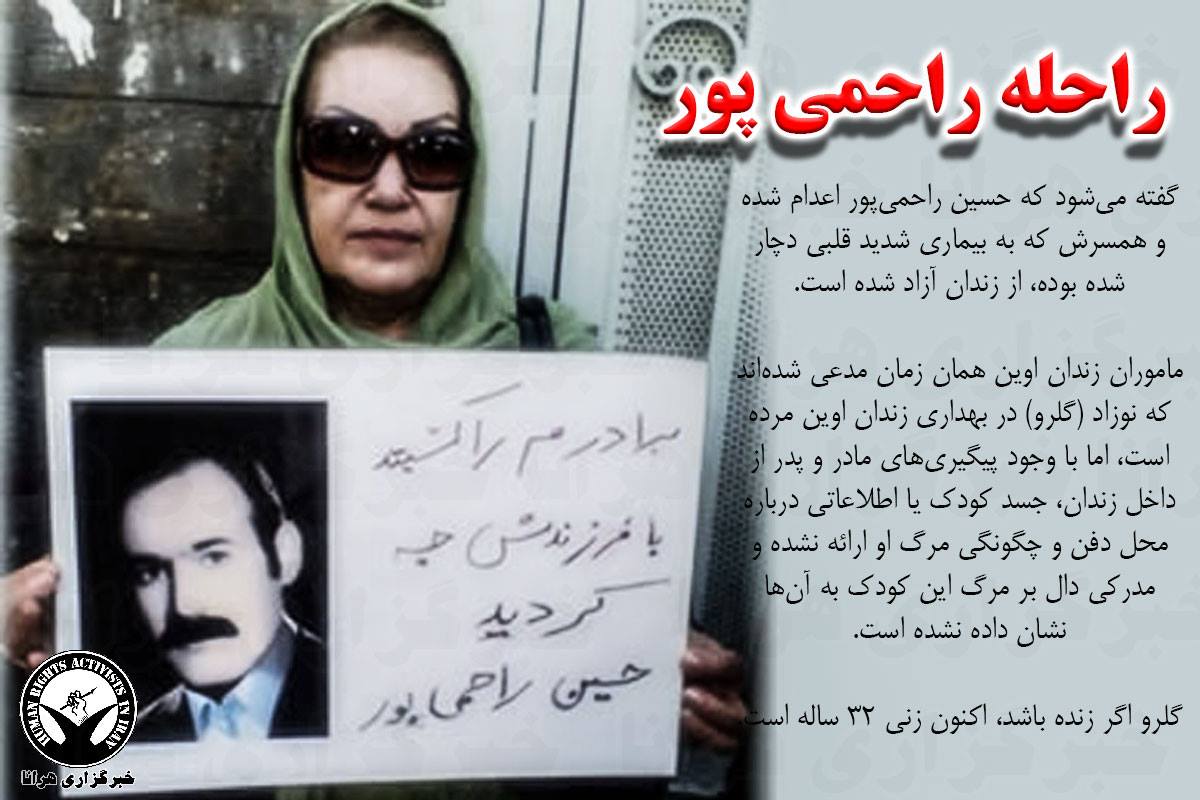 HRANA News Agency – The trial of Raheleh Rahemipour was held by Branch 15 of the Revolutionary Court. She has been accused of acting against national security because of demanding information about the disappeared child of his executed brother.
According to the report of Human Rights Activists News Agency in Iran (HRANA), the trial of Raheleh Rahemipour was held by Branch 15 of the Revolutionary Court, presided by Judge Salavati, on November 2, 2016.
A close source to Ms. Rahemipour told HRANA’s reporter: “The trial was unfinished and the follow up session was scheduled for December 13. Ms. Rahemipour has denied all allegations in that hearing.”
It should be reminded that, the Intelligence Ministry of the Islamic Republic has summoned and threatened Raheleh Rahemipour, aunt of Golroo, after the UN body, responsible for the case of Golroo and the missing baby in Evin prison, had questioned Iranian government about the baby and father’s fate.
The Ministry of Intelligence officials had told Ms. Rahemipour that she would be arrested, if she would follow the issue.
The UN Working Group on Enforced Disappearances has announced Golroo Rahemipour and her father as missing coercive and asked the Iranian government to be held accountable in this regard.
The group has confirmed Golroo and Hussein Rahemipour’s case as “forcibly disappeared” and asked the government of Islamic Republic to be held accountable in relation to the fate of this political prisoner and his child on June 9.
The Islamic Republic has not responded to the request of the UN Working Group on Enforced Disappearances, but the security forces in repeated telephone calls have asked Raheleh Rahemipour to show up at the Intelligence Office in Valiasr Avenue.
In response to a request for submitted written summons, they said; “We can arrest you in the street and transfer you to Evin prison, if we want it.”
According to the “International Convention for the Protection of All Persons against Enforced Disappearance”, governments have obligation to support plaintiffs, witnesses and relatives of disappeared persons against any form of ill-treatment or intimidation as a consequence of the complaint or testimony.
According to published information about this case, Iranian Revolutionary Guards officers arrested parents in their home in Tehran, when Golroo’s mother was pregnant.
Golroo’s mother was an employee of Social Security Administration and her father was a dentist and a member of the Organization of workers (Rahe Kargar).
Hossain Rahemipour was also arrested by SAVAK and was imprisoned at the time of Shah (Iranian King). Until a few months after the arrest of these two, their families have no information about their situations and after the family went to Hossein Ali Montazeri, Successor of Ruhollah Khomeini (former leader of Iran) in that time, they had been allowed to make phone calls and have a meeting.
It is said that Hossein Rahemipour was executed and his wife, who was suffering from severe heart disease, was released from prison.
The guards of Evin prison have claimed that the child (Golroo) had died at the same time in Evin prison’s clinic, but despite follow-ups by its mother and father from inside the prison, the body of the child or information about the tomb and the circumstances of its death was not clarified.
Golroo is now a 32-year-old woman, if she is alive.
Raheleh Rahemipour, her aunt, had participated in protest gatherings in front of Tehran Evin Prison, Tehran Bar Association and Dena Tire Factory with holding a placard of; “What have you done with the child of my killed brother.”
Security forces already in the interrogation of some participants of the protest gatherings, referring to the protests by Raheleh Rahemipour, had threatened to arrest her.