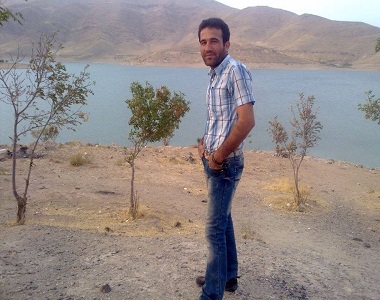 HRANA News Agency- After more than two years of detention and imprisonment, Khezr Rasool Morovat, student and civil activist, is still experiencing difficult circumstances in prison of Mahabad.
According to the report of Human Rights Activists News Agency in Iran (HRANA), Khezr Rasool Morovat, literature expert and former student activist, was arrested in early March 2012 and was transferred to the Office of Intelligence in Mahabad and later, to Mahabad prison.
He was arrested after participation in a rally, supporting Shin Abad students in front of the Department of Education in Mahabad. After a difficult period of interrogations, he was charged with propaganda against the regime, acting against the National Security through gathering and collusion, supporting PEJAK, and was sentenced to five years imprisonment by the court, which was precisely upheld on the court of appeal.
Khezr Rasool Morovat, who has been denied the right of getting a solicitor and right of the furlough, from the moment of his arrest on 8th March 2014, for unknown reasons was exiled to the prison of Urmia, and in April 2014, he was returned back to Mahabad prison.
This literature expert, formerly in August 1999, had been sentenced to 3 years imprisonment and 5 years suspended imprisonment by the Revolutionary Court in Mahabad city. After two years, he was released conditionally, and although he passed the entrance examination, but he was deprived of following up his education on Master Level.
According to HRANA’s sources, political prisoners in Mahabad prison are being held along with non-political prisoners, and sometimes with dangerous prisoners, in a crowded ward.
Also, since the presidency of prison has been changed, a new round of pressure and trample on the prisoners’ rights has started, and the families of prisoners have complained in different ways against this condition, but they have got no response yet.