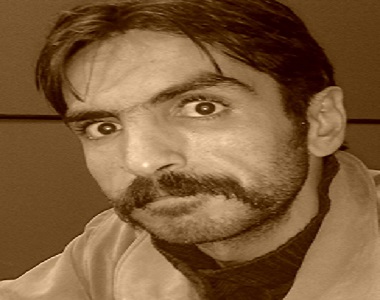 HRANA News Agency – Branch 26 of the Revolutionary Court in Tehran sentenced Reza Akwaniyan, poet and civil activist, to 3 years of imprisonment and 40 lashes for insulting the sacred by compiling poetry and propaganda against the regime. Mr. Akwanian had already been sentenced to 5 years suspended imprisonment and spent one year in jail.

According to the report of Human Rights Activists News Agency in Iran (HRANA), Judge Mashallah Ahmadzadeh, head of Branch 26 of the Revolutionary Court in Tehran sentenced Reza Akwaniyan, poet and civil activist, to 3 years of imprisonment and 40 lashes.

Mr. Akwaniyan was ultimately was sentenced to 1 year and 2 years and 40 lashes, respectively, for “propaganda against the system” and “insulting the 12th Shiite Imam” according to Articles 500 and 513 of the Islamic Penal Code.

The Revolutionary Court in both cases identified Mr. Akwaniyan’s poems and writings as examples of these charges.

A source close to Mr. Akwaniyan explained to HRANA’s reporter, “the poems of Reza were cited for issuing verdicts while his books and poems have even been licensed and printed in the Ministry of Culture of Hassan Rouhani.”

Reza Akwaniyan was tried at the first hearing because of being sued by the Revolutionary Guards on May 16, 2017, the last hearing was held at Branch 26 of the Revolutionary Court in Tehran on September 18, 2017 and the verdict was issued on October 28, 2017.

Mr. Akwaniyan’s charges were changed several times during the trial. He was first charged with insulting the leadership and propaganda in favor of opposition groups, ultimately he was sentenced on charge of propaganda against the regime and insulting the sanctity.

It should be recalled that Reza Akwaniyan who has published several books, was arrested for the first time in 2010 and was sentenced to one year of imprisonment and five years suspended imprisonment on charges of insulting the president and leader, attending protest rallies in Tehran and collaborating with human rights organizations through sending news and reports.

Mr. Akwaniyan was finally acquitted of the allegations made in the two above-mentioned cases.