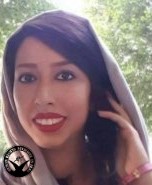 Saba Kord-Afshari, former political prisoner, was arrested at her home by security forces and was transferred to Vozara detention Center. Her house was searched by security forces and some of her belongings such as her cell phone and her laptop were confiscated. There has been no information on the reason of her arrested and the arresting authorities.

She was arrested along 50 others during last July-August uprising protesting the current economic deterioration and corruption on August 2, 2018 and was transferred to Varamin’s Gharachak prison. She was transferred to Evin prison’s women’s ward in October 2018 and was charged with “disrupting the public order” and was sentenced to one year in prison at the Branch 28 of Tehran’s Revolutionary Court led by Judge Moghiseh.