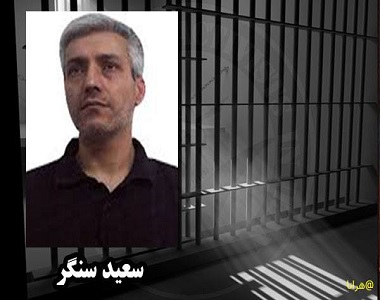 HRANA News Agency – Saeed Sangar, one of the oldest political prisoners in Iran who has been serving his 18 years impressment since 2000, has been acquitted of the charge of spreading propaganda against the regime in a case which had been recently formed against him.
According to the report of Human Rights Activists News Agency (HRANA), on October 28, 2017, according to the announcement No. 9610104499000137, which was notified to Saeed Sangar, political prisoner, he was acquitted of the charge of “propaganda activity against the regime” in Branch 10 of the Prosecution of the Revolutionary Courts in Urmia.
Last year, security forces tried to form a case against Saeed Sangar entitled by charging him of propaganda against the regime from inside the prison. The case was created by interrogation, which ended in favor of Mr. Sangar by the verdict issued by Branch 10 of the Prosecution due to the lack of documents.
The life-time sentence of Saeed Sangar, political prisoner was reduced to 18 years imprisonment in the 16th year of imprisonment in Urmia prison, according to the announcement of the executive court of Sanandaj.
Saeed Sangar, son of Mustafa, born on May 1, 1973, was arrested on August 31, 2000, but the date of arrest has been noted as October 29, 2000 in his casel.
Mr. Sangar was sentenced to death on charges of moharebeh and his connection with the MEK by branch one of revolutionary court in Sanandaj, headed by Judge Fatemi, on November 18, 2000, and then transferred from the detention center of Sanandaj intelligence to ward 209 of Evin Prison in Tehran and was kept in solitary confinement until the year 2003. He was sentenced to life imprisonment and transferred to Urmia prison at the stage of his appeal in December of 2003.
The political prisoner was transferred from the prison of Urmia to Sanandaj Prison on November 5, 2007. Then he was again transferred from the prison of Sanandaj to Urmia Prison on September 1, 2015.
The central prison in Sanandaj demanded forgiveness for him in 2014, that his sentence was reduced to 18 years on December 23, 2016, by the announcement of Branch 4 of the executive court of Sanandaj.
Following this announcement, he will be released on July 26, 2018.
Saeed Sangar, political prisoner from Piranshahr, is currently serving the seventeenth year imprisonment in Urmia Prison.