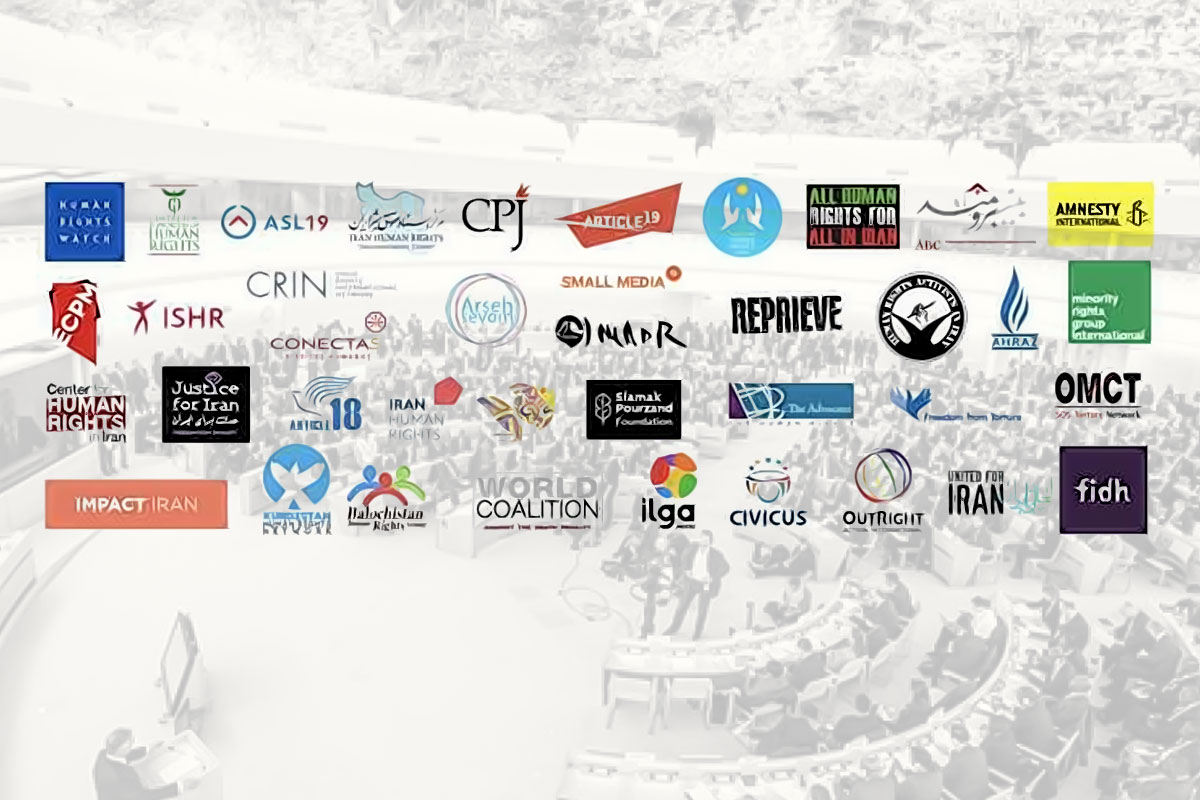 Human Rights Activists in Iran and 38 other NGOs have called on the United Nations Human Rights Council to renew the mandate of the UN Special Rapporteur on human rights in Iran. The joint letter has been sent to all Permanent Missions to the UN in Geneva, ahead of the vote scheduled for the end of this week.

Read the full text below:

We, the undersigned Iranian and international human rights organizations, urge your government to support resolution A/HRC/43/L.8 on human rights in the Islamic Republic of Iran renewing the mandate of the United Nations Special Rapporteur on human rights in Iran during the 43rd session of the Human Rights Council.

The renewal of this mandate is essential in light of the persistence of widespread and systematic violations of a large array of human rights in the country, many of which stem directly from Iran’s restrictive laws, state policies and practices. It is further warranted by Iran’s ongoing failure to avail itself of the scrutiny of human rights monitors, to uphold the right of people in Iran to truth, justice and reparation, and to hold perpetrators of human rights violations to account.

Iran’s violent repression of nationwide popular protests that erupted in November 2019 has illustrated yet again this failure, with deeply tragic consequences for thousands of victims and their families. The intentional use of lethal force by security forces between 15 and 18 November 2019 resulted in the unlawful killing of hundreds of protesters and bystanders, including children, who posed no imminent threat to life or serious injury. Amnesty International has documented the deaths of 304 men, women and children but has noted that it believes the death toll to be higher. The scale of lethal force and other unnecessary or excessive force used against unarmed protesters is a deeply alarming escalation of past abusive practices of Iran’s security and intelligence forces, who have previously unlawfully killed and injured protesters and other dissidents with impunity.

This severe crackdown has also involved the arrest of around 7,000 people, according to a spokesperson for Iran’s parliamentary committee for national security and foreign policy, as well as widespread patterns of enforced disappearances, incommunicado detentions, and torture and other ill-treatment of detainees. Iranian officials called for charges that carry the death penalty against protest “leaders”, creating an urgent concern for the fate of those arrested; three men have already been convicted of “enmity against God” (moharebeh) and sentenced to death in a grossly unfair trial in connection with acts of arson that took place during the November 2019 protests. Hundreds more have been convicted of vague and broad national security-related charges, often stemming from the peaceful exercise of their rights to freedom of expression, association and assembly, and sentenced up to 10 years in prison as well as, in some cases, flogging. Courts relied on torture-tainted “confessions” as evidence on which they based their verdicts, even when retracted by defendants.

The repression took place under the cover of a near total shutdown of the global Internet in Iran, and ongoing severe restrictions on the free flow of information, and free expression, both online and off-line. The call of the UN High Commissioner for Human Rights for transparency and for Iran to undertake “prompt, independent and impartial investigations into all violations that have taken place” has remained unanswered. The Iranian authorities have been carrying out systematic reprisals against the families of the victims to enforce silence and perpetuate impunity. Disturbingly, top officials in the country have been making statements that, in fact, praise the security and intelligence forces for swiftly ending the unrest, and celebrate the crackdown as a “crushing victory” against what they have described as “a vast and very dangerous conspiracy plotted by the enemy”.

This recent and ongoing human rights crisis is taking place against the backdrop of a long-term systemic refusal of the Iranian authorities to uphold the rights of people in Iran to freedom of expression, freedom of association and peaceful assembly. Individuals expressing dissenting opinions, human rights defenders, trade union activists, journalists and media workers have been routinely harassed and under attack throughout 2019 and in 2020. The Iranian authorities also intensified their crackdown against women’s rights defenders campaigning against discriminatory forced veiling laws, sentencing some to harsh prison terms. Similarly, labour rights activists have been tortured or otherwise ill-treated and unjustly sentenced to lengthy prison terms for activities related to their peaceful activism. Sixteen activists who had signed or supported an open letter calling for the resignation of the Supreme Leader and demanding fundamental changes to the country’s political system were arrested in August 2019 and are facing long-term imprisonment.

Journalists and media workers faced intimidation, harassment, summons, interrogations, and arrests, sometimes leading to prison sentences, with a surge in the aftermath of the November 2019 protests, and in the lead-up to the February 2020 Parliamentary elections, as documented by the Committee to Protect Journalists. Even journalists based outside Iran faced harassment and threats. Obstruction to the work of journalists and online media users seeking and publishing information in relation to the downing of the Ukrainian Airlines plane in January 2020 and to the spread of Covid-19 in Iran has also been reported. In this context, transparency and openness to independent journalism and to human rights monitoring are more than ever necessary.

After a trial lacking minimum standards of due process, a Revolutionary court also convicted and sentenced eight conservationists detained since January 2018 to prison terms ranging from six to 10 years for “cooperating with the hostile states against the Islamic Republic” in relation to spying for the United States, relying almost entirely on “confessions”, allegedly made under torture and later retracted, as the main evidence against them.

As abundantly documented in the reports of the United Nations Secretary-General and the Special Rapporteur, discrimination in law and practice remains pervasive and a daily reality for women and girls, for persons belonging to ethnic, religious or linguistic minorities, including non-recognized religious minorities, as well as for lesbian, gay, bisexual and transgender (LGBT) individuals. In 2019, parliament approved a bill amending the Civil Code to allow Iranian women married to non-Iranian men to pass on the Iranian nationality to their children upon request and following a security screening of the children; the new law came into force after the Guardian Council ratified it in October 2019. Parliament, however, failed to pass a long-standing bill on violence against women. Ethnic minorities, including Ahwazi Arabs, Azerbaijani Turks, Baluchis, Kurds and Turkmen have continued to face entrenched discrimination, which curtails their access to education, work, health, housing and elected or appointed political office, and violations of their cultural, civil and political rights.

Freedom of religion or belief continues to be extensively and systematically disregarded, including for Baha’is who face widespread and systematic persecution, hate speech and obstacles to access to education and work. Christian converts and Yarsanis (Ahl-e Haq) as well as Sunni Muslims and non-believers are also persecuted for expressing or practising their faith or beliefs or face widespread discrimination. Members of Iran’s LGBT community continue to live under the threat of a penal code criminalizing same-sex sexual relations between consenting individuals with punishments ranging from flogging to death, and of a stigmatizing public discourse that make them vulnerable to police harassment, discrimination and violence.

Throughout the year, torture and other ill-treatment, including prolonged solitary confinement, was widespread and systematic in places of detention. Many of those jailed have been deliberately denied access to essential medical care. A number of human rights groups have received information from victims’ families indicating that their loved ones, who were arrested in relation to the November 2019 protests, have died in detention in suspicious circumstances, possibly resulting from torture. Human rights organizations have documented the executions of over 240 individuals in 2019. Among persons who were executed in 2019, at least four were under 18 at the time of the offence, and a dozen executions were carried out in public.

Iran’s judicial system, which should be the ultimate guardian of the rights of all people in Iran, has instead been perpetuating patterns of grave violations of human rights. The Secretary-General in his report presented at this session observed a “deterioration of fair trial guarantees” in 2019, pointing to a recent instruction from the head of the judiciary that allowed appeal proceedings to take place in writing and without a hearing, and a proposed amendment to the Code of Criminal Procedure that, if adopted, would further limit the access of a person accused of national security crimes to a lawyer. These developments have come in the context of systematic violations of fair trial standards, including closed, summary trials, individuals facing national security or other charges being systematically denied access to independent lawyers at the investigation stage and some defendants being denied access to their lawyer even at trial, and extensive use of torture and other ill-treatment, especially during interrogations, to extract “confessions”, that are in many cases used as evidence on which judges base their verdict, and that are sometimes broadcasted on state television.

In an opinion adopted in August 2019, the UN Working Group on Arbitrary Detention raised alarm at “a systemic problem with arbitrary detention in the country, which amounts to a serious violation of international law” In a number of opinions adopted in recent years, the Working Group has further reminded the authorities that under certain circumstances, widespread or systematic imprisonment or other severe deprivation of liberty, in violation of fundamental rules of international law, may constitute crimes against humanity.

In such a context, the work of the Special Rapporteur on human rights in Iran is critical to monitor, document and report on the many systemic human rights challenges that people in Iran are facing, to engage with Iranian authorities on issues of concern, and to transmit potentially life-saving urgent communications on behalf of victims of human rights abuses, including individuals convicted of offences committed while  under the age of 18 and at risk of imminent executions or prisoners being denied access to medical care. The Special Rapporteur’s work amplifies the voices of victims within the UN system, and this mandate’s expert findings and recommendations steer and inform stakeholders’ efforts to encourage Iran to undertake long overdue human rights reforms.

Association for Human Rights in Kurdistan of Iran – Geneva (KMMK-G)

Center for Human Rights in Iran

International Movement Against All Forms of Discrimination and Racism (IMADR)