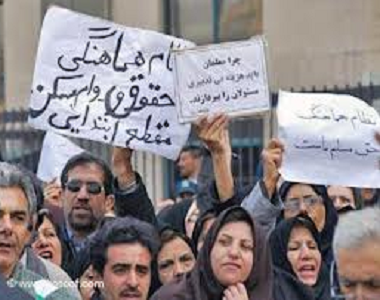 The Teachers’ Week ended in Iran, while teachers are still trying to eliminate any discrimination and inequality emphasizing on the pursuit of their demands,

In recent years, despite several promises of the authorities to solve the problems of teachers, including the elimination of discrimination in employment and payments, having health insurance, health care and pensions, we see still continuation of these problems, also, teachers’ union activities, like other areas of their activities, have not been safe from the developing security approach and we can see harsh collisions with the teachers’ associations such as Teachers’ Union and Teachers’ Organization, widespread detention of their members, and heavy judicial sentences.

Seyed Mahmood Bagheri and Rasool Bodaghi, well known teachers’ union activists have spent years in prison. Recently, after holding peaceful protests by the teachers, prison sentence of Secretary General of Teachers Organization, Mr. Alireza Hashemi, has been enforced by the Justice officials and he is imprisoned.

Human Rights Activists in Iran believes, peaceful union activities are teachers’ rights and teachers as one of the most extensive community groups that work directly in line with education for next generation of the country, deserve a sublime and valuable position and benefit from appropriate trade facilities, health care and social security.

The end of “Teachers week” this year, also coincides with the fifth anniversary of Farzad Kamangar’s execution, a reputed and famous Iranian teacher, who despite repeated requests by his family and the international community, and despite judicial officials’ promises, during a wrongful process, was executed at dawn on 9th May 2009.

Human Rights Activists in Iran, while honoring the memory of Farzad Kamangar, asks the Authorities of the Country, provide the circumstances for teachers to achieve their legitimate demands by pursuing a constructive and responsible policy also by releasing imprisoned teachers and giving an end to security approach to the teachers union demands, providing the condition for teachers propitiation and eliminating security approach to their trade activities.
Secretariat of Human Rights Activists in Iran
9.5.2015