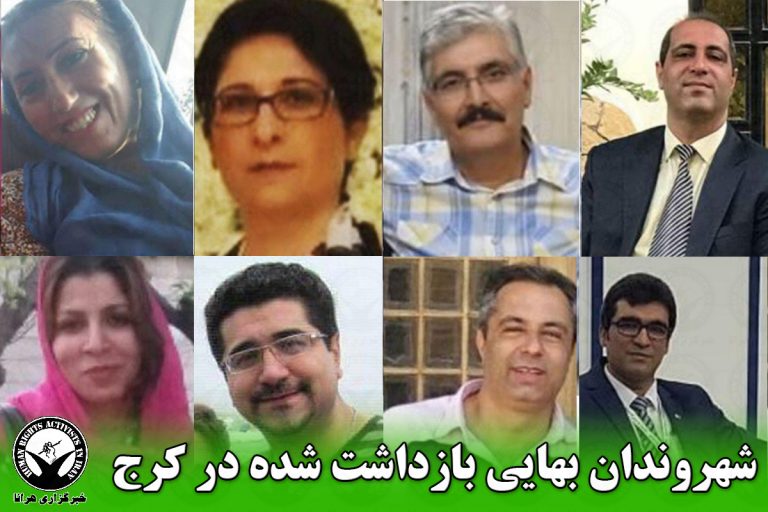 Human Rights Activist News Agency (HRANA) – Thirty days have passed since security forces first swept through Karaj and began arresting its Baha’i residents, sending eight of them to prison after inspections of their homes between September 16th and October 17th.

From the walls of Evin Prison, these eight await definitive answers to why, and for how long, they will have to stay there. They were previously identified as Parvan Manavi, Elham Salmanzadeh, Hooman Khoshnam, Payam Shabani, Peyman Manavi, Maryam Ghaffarmanesh, Jamileh Pakrou (Mohammad Hossein) and Kianoush Salmanzadeh.

“The Baha’i detainees said over the phone that they had been transferred to Evin Prison […],” an informed source told HRANA. “Despite inquiries from their families, no information is currently available regarding their status.”

Parvan Manavi and Elham Salmanzadeh became the seventh and eighth Baha’is to be arrested in Karaj after authorities confiscated some of their books and personal belongings during a raid of their homes Tuesday, October 16th. Khoshnam and Shabani were arrested on September 25th and 26th of this year, and Peyman Manavi, Kianoush Salmanzadeh, Ghafarmanesh, and Pakrou were arrested September 16th.

The threat of arbitrary detainment loomed larger than ever over Iran’s Baha’i religious minority this past month, as Iran’s security and judiciary establishment whisked away a number of its members in a surge of arrests that has yet to be explained. HRANA also reported on the arrests of Baha’i citizens in the central cities of Shiraz and Isfahan over this time period.