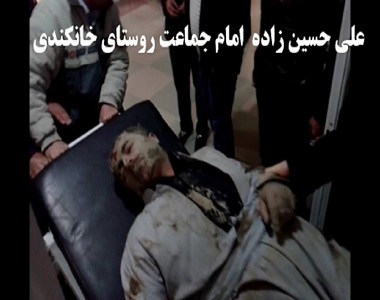 HRANA News Agency – A Sunni Imam from Iran’s Kurdish minority was left unconscious in a field in Iran’s West Azerbaijan province after being interrogated and savagely beaten by plain-clothed officers on Monday 19 January 2015.

According to the report of Human Rights Activists News Agency (HRANA), Ali Hosseinzadeh, the Imam of the Khankandi village mosque in the city of Miandoab, was pursued by plain-clothed armed officers near the village of Dash Band on the Bukan-Miandoab road on Monday evening.

He was chased by the armed officers, who were travelling in two cars with personalized number plates, until he was detained near the village of Anbar in the Akhtachi-ye Sharqi Rural District.

The officers punched and beat him severely, and suffocated him by pushing his head into the mud, before they abandoned his lifeless body.

Ali Hosseinzadeh’s unconscious body, covered in mud, was discovered hours later by his relatives and friends who had been searching for him, who rushed him to hospital in the city of Bukan.

After regaining consciousness he was able to inform his family about what had happened, although his condition once again began deteriorating the following day, leaving him unable to speak.

As of Friday, 23 January, his speech was still impaired and he was suffering from nausea and dizziness in addition to the injuries he sustained during the attack.

The attack is presumed to have been orchestrated by the Ministry of Intelligence in Bukan, who had repeatedly threatened the Sunni Imam.

Out of the five attackers, four had been Persian speakers, indicating that they were not local to the area. Only one of the officers had spoken in Kurdish.

Ali Hosseinzadeh had previously received a written summons for interrogation from the Ministry of Intelligence in Bukan, after he had held a meeting at the Khankandi village mosque.

After arriving at the Ministry of Intelligence in Bukan, he was told that the interrogation had been adjourned because the interrogator was not there, and was told to come back at a later date.