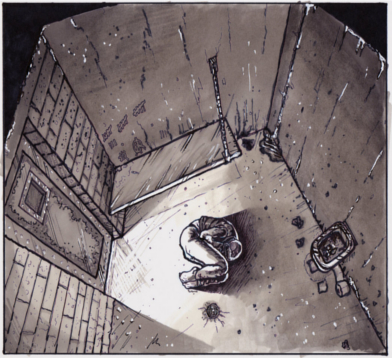 HRANA News Agency – A 25-year-old prisoner, Payam Islami, was found dead while locked up in solitary confinement equipped with closed-circuit cameras.  He was beaten and transferred to solitary confinement after brawling with another prisoner over a piece of bread.  There has been a severe shortage of bread in Rajai-Shar Prison in recent months.

Prison officials claim that Islami hanged himself on Wednesday, July 17, in prison.  He was serving time on assault charges.
According to a report by Human Rights Activists News Agency (HRANA), two inmates in Rajai-Shar Prison fought over a piece of bread on Tuesday, July 16.  Following the brawl, Islami was first taken to the guards’ unit where he was beaten by the prison’s internal manager, Amirian, and the warden, Mardani.  Prison officials used batons and polypropylene pipes to hit him.
Islami was then transferred to solitary confinement without being allowed to appear in front of a disciplinary board.  A few hours later, he was found dead in his cell.