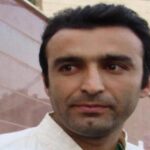 HRANA News Agency – Abolfazl Abedini, the political prisoner in Karoon prison in Ahwaz, was sent to furlough after 4 years.

According to the report of Human Rights Activists News Agency (HRANA), Abolfazl Abedini Nasr, the Khoozestani journalist, has been sent to furlough for the first time after 4 years. END_OF_DOCUMENT_TOKEN_TO_BE_REPLACED

HRANA News Agency – Said Abedini the imprisoned priest, has been transferred form section 240 of Evin prison to Tehran Modarres hospital and been back to the prison after getting outpatient treatment.

According to a report by Kalameh website, Said Abedini who is one of ten political prisoners who are in the solitaries of the Evin prison has been transferred to the hospital because of having stomach bleeding and after a short visit by the doctor been back to the Evin prison. END_OF_DOCUMENT_TOKEN_TO_BE_REPLACED

10 political prisoners are transferred to solitaries

HRANA News Agency – 10 political prisoners of the section 350 of the Evin prison have been transferred to the section 240’s solitaries.

HRANA –In  the evening of September  16th 2010 Mr. Abolfazl Abedini Nasr,  the journalist and human rights activist was beaten up in the worst form in Karoon jail of Ahwaz city.
According to the report by  HRANA,  in this incident an individual named “Ghalandari” the jail staff member,  attacked Mr. Abolfazl Abedini and severely harmed him physically.  While awaiting in the yard of section 6 of the jail in order to use the bath-room, Mr. Abolfazl Abedini was attacked  by the said individual without any excuse.  While having  tied up his hands and legs with handcuff and chains to a rod  in the yard of section 6, Mr. Abolfazl  Abedini was  beaten up for hours with a green rod.  Due to the severity of the blows,  Mr. Abedini’s  hands and legs are blued and blacked.  None  of the authorities of Karoon jail take responsibility in answering for the incident.

END_OF_DOCUMENT_TOKEN_TO_BE_REPLACED

HRANA- On Tuesday August 17, 2010 Abolfazl Abedini Nasr, journalist and a former official of Human Rights Activists in Iran, was banned from any movement outside of his ward in Karoon Prison until further notice.

According to HRANA reporters, the order handed down by the warden of Karoon Ahvaz Prison creates difficult conditions for Abolfazl Abedini because he must to go to the prison clinic every three days to pick up his needed medication.

From the day of his arrival to Karoon Ahvaz Prison, Mr. Abedini has been faced with a series of pressures including the denial of visitation rights, telephone access, and restrictions on his movement.