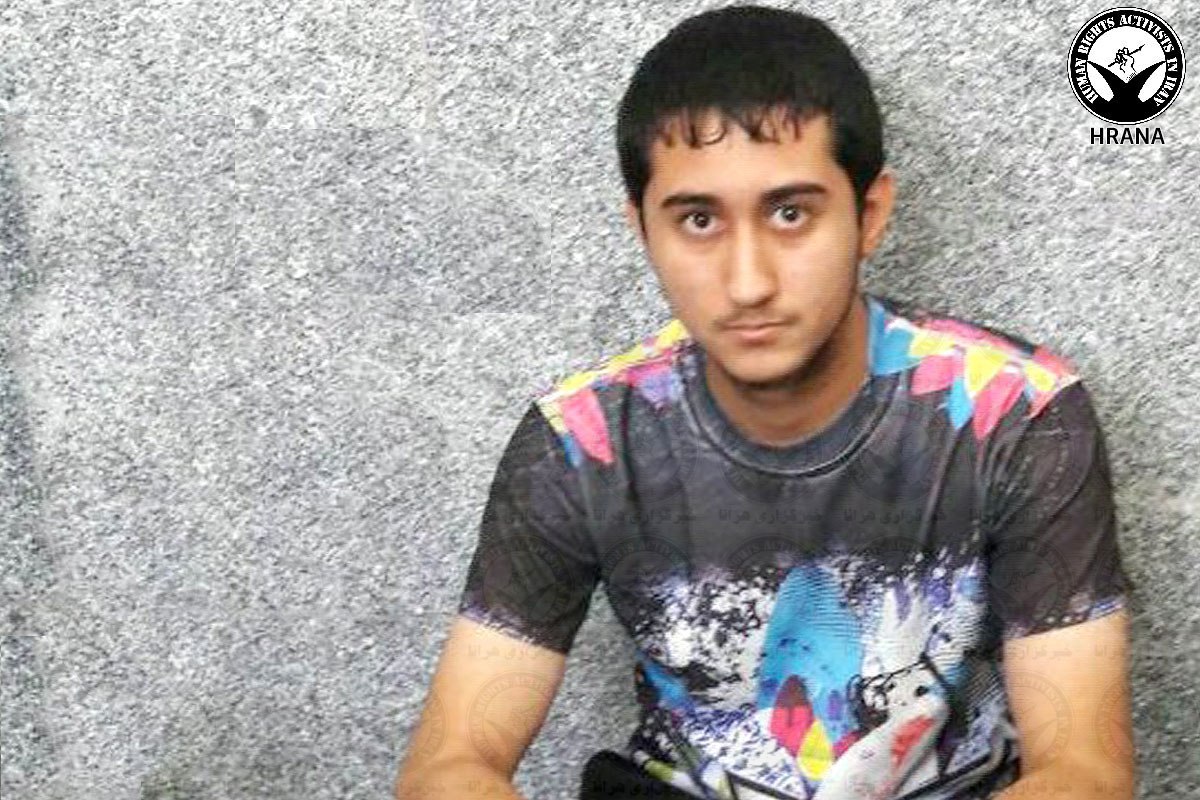 Human Rights Activists News Agency (HRANA) – The following feature is sourced from a report given to state-run news agency Ghanoon Daily and translated to English by HRANA.

I. The Boy Who Took the Fall

Clad in black from head to toe, Simin sits silently in her humble home at the end of an alley on the outskirts of Qom, central Iran. In a corner of the room sits her 50-year-old husband, whose hair has turned fully white. Against the far wall sits their son Mohammad.

Their demure is sparsely decorated: an old TV set and a brown wooden cabinet, on which sits a photo of her son Abolfazl Chezani. His picture overlooks a room muted by grief. It has been 38 days since Abolfazl, 18, was hanged for murder.

As is customary among the Shiites, the family is preparing a ceremony in observance of the 40-day mourning period following his death.

Once in a while, a deep sigh from Simin breaks the silence. As she lowers drinking glasses and a pitcher of cold water to the floor, she draws a breath and remembers aloud the events of one day, four years ago, that would change their lives for the worse forever.

“Abolfazl was working in a Sohan[1] baking factory. That afternoon, he came home late from work and asked me to make him a cheese sandwich…”, she said, pointing to a spot on the carpet. “Abolfazl was standing right there in front of me. He was looking at himself in the mirror…then his friend Ali came by on a motorcycle and buzzed the door to ask if Abolfazl would join him. I didn’t know where they were going….he left home, and never came back.”

She recoils in pain, silenced for a moment by grief; her hands wring together, and she bursts into tears, eyes still fixated to the spot on the carpet where she last saw her son. The rest of her words are choked — the lump in her throat lets out halting, unintelligible sounds. Fat tears flow down the wrinkles of her face, rolling down her skirt to the carpet.

Abolfazl’s father and his brother Mohammad pick up where Simin left off: their home was raided by the police that day, they say, who left when they realized Abolfazl wasn’t home and was only a child. Upon his return, Abolfazl’s father stopped him at the threshold of their home, to escort him to the station to turn him in to the police.

His father and brother went off to visit the assault victim: 20-year-old Morteza, who was in critical condition suffering from stabs to the heart. Ali, who was Morteza and Abolfazl’s mutual friend, was also arrested. During Ali and Abolfazl’s detainment, Ali convinced Abolfazl to take the blame because he was the younger one. “In a few days, Morteza will recover, and then they’ll let you go,” Ali told him. So Abolfazl told police that he was the sole one responsible for Morteza’s assault. Ali was released three days later; eleven days after that, Morteza died of his injuries. Abolfazl had confessed to a murder.

II. Lack of Due Process

Abolfazl’s brother Mohammad explains that Ali had fought with Morteza two weeks prior to the stabbing incident. “Ali was in our alley that day, looking for another guy named Hamid to take him to fight Morteza again,” he said. “Since he couldn’t find Hamid, he took Abolfazl.”

Morteza’s family requested to file a complaint against Ali, who they believe instigated the brawl that ended in his murder. Mohammad continues: “during the trial, [the judge] didn’t even permit testimonies from witnesses who saw Ali pick up Abolfazl that day. We went to the court with the neighborhood elders to push the complaint against Ali, but to no avail.”

Simin goes to a drawer and takes out a red shirt. “He bought this to wear at his brother’s wedding”, she said, caressing the shirt as her tears flow. Abolfazl’s father explains that he tried to persuade the family of the victim to pardon Abolfazl[2] by going to their home, but he was ignored. “We sent many people to mediate and convince them to forgive, but they wouldn’t even allow them inside the home. I personally went to their family’s elder and pleaded with him to spare my son’s life. I told them I would give whatever blood money they asked. I would sell my house. I would take up a collection. But they stayed silent. We really wanted to meet with the victim’s family during the trial, but the judge wouldn’t allow it. We asked for help from the prison social worker, who went to Morteza’s family only once.

On the day of Albofazl’s execution, they waited outside the prison. Simin threw a copy of the Quran at their family car, crying and begging them for forgiveness before they entered the prison, but they just sat in their car and stared out at me.”

When confronted after the execution by some of Abolfazl’s relatives, Morteza’s mother said: “My son died. So did hers.”

Mohammad recalls the details of the trial. “My brother’s case had two judges. Months after the case was handed to the second judge, he was executed. We were still in the middle of the second legal process. Had they seen the process through, perhaps we could have found a recourse; maybe the family of the victim would have decided to pardon him. What’s the rush in carrying out the execution? The victim’s father, who pulled the stool out from under Abolfazl’s feet at the hanging, is in an awful emotional state. Taking a life with your own hands isn’t easy to forget, especially my brother’s, who was only 14 at the time of the murder, and when executing a child is forbidden all over the world.”

III. Four Trips to the Gallows

During the four years and six months of his imprisonment, and before finally being executed, Abolfazl Chezani was taken three times to the prison quarantine, where condemned inmates spend the eve of their executions. Those three times, his execution was stalled. “In his childish mind,” Mohammad says, “he didn’t understand that quarantine means he could be executed the next day. He never thought the world could be so cruel as to throw a rope around his neck and take his life.”

IV. A Portrait of Kindness and Optimism

What happened on the night of the murder is unclear. Abolfazl’s conduct and spirit in prison showed no indication that he was capable of such violence. His family collected testimonials from neighbors who noted that Abolfazl had never before engaged in fights or brawls.

He observed Ramadan in prison, fasting until his eyes hurt. He had observed Ashura [3] since childhood and would organize the memorial procession himself. In prison, he took to memorizing the passages of the Quran. He earned a “good behaviour” designation in the Juvenile Rehabilitation and Education Centre.

Simin shares that her son “stopped studying in the seventh grade. He quit school to work, and would give me his salary.”

Mohammad explains how his family’s suffering during the ordeal made Albolfazl feel ashamed. “I’d try to console him, and he would just hang his head without uttering a word. It’s as if we all died on the day he was executed.”

Abolfazl always comforted his family, they say, right down to their last visit. Simin remembers her telling him, with eyes full of hope, “Don’t fret mom, nothing will happen!” To the prison social worker who brought him a copy of the Quran and told him not to be afraid on the eve of his death, he responded with a laugh. “They won’t execute me. I’ll be pardoned.”

Amnesty International had previously issued a statement asking Iranian authorities to stop the execution proceedings of Abolfazl Chezani, who was a minor at the time the offense was committed.

After Abolfazl’s execution, Amnesty International criticized the compliance of Iranian courts, parliamentarians, and doctors in “compliance with assault on the rights of children.” Amnesty referred specifically to a court-affiliated doctor who, by providing “maturity” assessments on convicts with death sentences, “effectively facilitate the execution of those who were children at the time of their crimes.” A report of this kind was used to justify the death sentence of Abolfazl Chezani.

[1] Sohan is a brittle Iranian sweet made with saffron and rosewater. The city of Qom is known for its Sohans.

[2] Qesas, an “eye-for-an-eye” punishment encoded in Iran’s Islamic penal code, which grants the family of murder victims to either seek the death penalty or accept dieh — “blood money” — in return for sparing the life of the accused.

[3] Ashura is a Shiite ceremony commemorating the death of Hussain, the 3rd Imam and Prophet Mohammad’s grandson, who was killed in a battle in 7th century A.D. Many Iranians and Iraqis observe days of mourning and large processions in remembrance of his death.