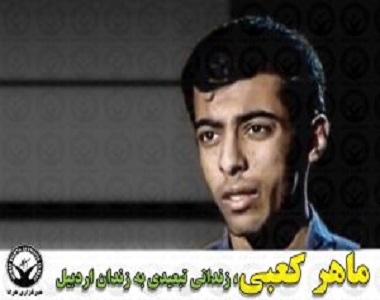 HRANA News Agency – Maher Kabi, Arab prisoner from Shoush, is one of the prisoners who were arrested in connection with protests and demonstrations by the Arab citizens against “the demographic change of the province” in 2011 and has been sentenced to imprisonment in exile. He was tortured by being fasten to the bed and lashed and eventually he was forced to give false confessions on TV.
According to the report of Human Rights Activists News Agency in Iran (HRANA), Maher Kabi, son of Rahim, civil engineering student and a resident of the city of Shoush in Khuzestan Province, is serving 10 years imprisonment in exile at ward seven of Central Prison of Ardabil, on charges of “membership in Ahwaz Liberation Organization, propaganda against the regime through connection with the enemy medias and sending false news in order to demonize the Islamic Republic of Iran at the international level and also stimulate citizens to take action against the regime (taking part in protests in Ahvaz April 15)”. END_OF_DOCUMENT_TOKEN_TO_BE_REPLACED

HRANA News Agency – Six political-security prisoners, including five Baluch and one Arab Ahvazi citizens, in Ardabil Central prison are enduring their imprisonment in exile. These people are among the prisoners, about whom less information has been published so far.
According to the report of Human Rights News Agency in Iran (HRANA), Ardebil prison is firmly under the control and supervision of the security forces. END_OF_DOCUMENT_TOKEN_TO_BE_REPLACED