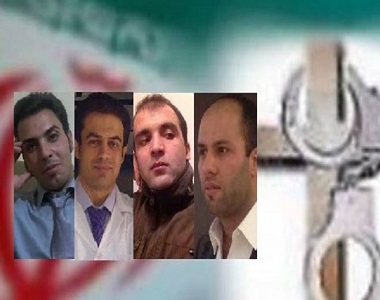 According to the report of Human Rights Activists News Agency (HRANA), few days ago, Ehsan Sadeghi, Maryam Asadi, Ali Arfa`, Vahid Safi, Amin Mazloomi and two more people were arrested in an attack to a church in south of Tehran, by security forces.

An informed source, based on the available evidence, introduced Mr. Sadeghi and Safi as the Afghan citizens who have been resided in Iran and newly converted to Christianity.

According to this report, some of the new converted to Christianity people who gathered in order to celebrate the Easter in Ms. Asadi’s house were arrested by security forces. The forces did not have uniform and their behavior was very insulting. After the rush, security forces started investigation and capturing books, notes and other educational stuff.

According to the most updated information regarding this case, after numerous follow up and search of some the families of arrestees to the police, the office of intelligence service and judiciaries, they have informed that this arrest was carried out by intelligence fairs of a military organization and just after the end of investigations they would be able to contact them. They have also warned that they should not publicize and interview with anonymous people.

This source added that the family of Mazloomi could talk to their child.