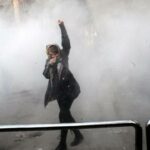 According to the report of Human Rights Activists News Agency in Iran (HRANA), after a joint meeting of students’ councils at the University of Tehran with the university’s headquarters, which was conducted to talk about the freedom of students detained during the protests, at least 4 students were arrested, on December 31. END_OF_DOCUMENT_TOKEN_TO_BE_REPLACED 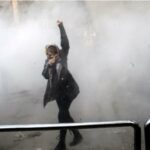 HRANA News Agency – The authorities, in addition to informing the two deaths in Dorud conflicts, gradually provided more information about hundreds of arrested people in the national protests on fourth days of the popular protests in various cities of Iran. At the same time, it is reported from Evin prison that prison authorities had prepared a certain place for accepting a large number of detainees by evacuating the halls of prison.

According to the report of Human Rights Activists News Agency in Iran (HRANA), Evin prison authorities have considered a certain place for keeping the detainees in recent days through evacuating the quarantine of ward 4 of the prison, which has a capacity of 180 people. END_OF_DOCUMENT_TOKEN_TO_BE_REPLACED