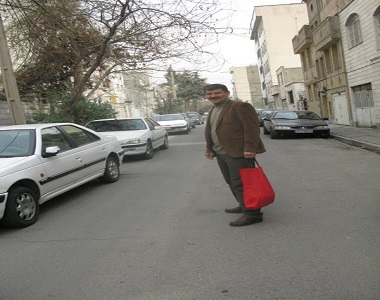 HRANA News Agency – Bahman Ahmadi Amoui has returned to Rajai Shahr Prison in Karaj by the end of his furlough.

According to the report of Human Rights Activists News Agency (HRANA), Bahman Ahamdi Amoui has been sentenced to 5 years and 4 months in prison and came to furlough on October 9, 2013. END_OF_DOCUMENT_TOKEN_TO_BE_REPLACED

HRANA News Agency – Paris-Geneva, September 11, 2012.The Observatory for the Protection of Human Rights Defenders, a joint programme of the International Federation for Human Rights (FIDH) and the World Organisation Against Torture (OMCT), was informed of four new cases of arbitrary detention against human rights defenders in Iran. Several rights activists andjournalists have been taken into custody to serve prison sentences, while charges have been brought against others.

On September 8, 2012, Ms.Shiva Nazarahari, a founding member of the Committee of Human Rights Reporters (CHRR) and member of the Campaign for Equality and child rights activist, was taken into custody at Evin prison. She had been summoned in late August 2012 to serve a four-year prison sentence upheld on appeal against her on January 8, 2011 on charges of “propaganda against the State”, “assembly with intention of conspiring against the Islamic government”, “disturbing the public mind” and “waging war against God”. The Observatory recalls that Ms. Nazarahari has been arrested many times over the past decade for her activities as a human rights defender: 20 days in 2002, three weeks in 2004, three months in 2009 and almost nine months in 2010[1].

In addition, on August 22, 2012, Mr.Navid Khanjani, also a founding member of the CHRR and a founding member of the Association to Oppose Discrimination in Education, and Mr.Hossein Ronaghi Maleki, blogger and human rights activist, were arrested along with dozens of other activists who had travelled to East Azerbaijan province to help the earthquake victims. Both have remained in detention although a number of other persons arrested with them have been released on bail.

In Mr. Khanjani’s case, his arrest and subsequent transfer to Evin prison in Tehran on September 8 raises fears that the authorities have decided to implement the 12-year imprisonment sentence against him that was upheld on appeal in August 2011. Mr. Khanjani was sentenced on charges of “spreading lies”, “creating unease in the public mind”, “propaganda against the system”, “membership of the CHRR” and “forming the Association to Oppose Discrimination in Education”. He indeed contributed in establishing this association after he was banned from continuing his academic studies for being a follower of the persecuted Baha’i faith. The Observatory recalls that he was previously detained for 65 days in 2010[2].

As for Mr. Ronaghi Maleki, he has been serving a 15-year prison sentence after being arrested on December 13, 2010 and convicted on charges of “membership of Iran-Proxy Internet Group”, “propaganda against the system”, “insulting the Iranian Supreme Leader and the President”. At the time of his latest arrest in August 2012, he had been on sick leave after undergoing several operations on his kidneys that were damaged after being repeatedly tortured during his detention, including 13 months in solitary confinement. His most recent arrest raises concerns about his physical and psychological integrity. His whereabouts remain unknown.

On September 8, 2012, Mr.Issa Saharkhiz, a journalist and founding member of the Iranian Association for the Defence of Freedomof Press, went on hunger strike and refused to take food and medicine after being transferred to the Rajaishahr prison far from his residence in Tehran. Mr. Saharkhiz had been in hospital for about six months until August 28 when he was sent to solitary confinement in Evin prison at the start of the Non-Aligned Movement summit in Tehran. He was arrested on July 3, 2009 and sentenced to three years imprisonment on charges of “insulting the leader” and “propaganda against the system.” In August 2011, the authorities brought up a case dating back to 11 years ago, and sentenced him to two more years imprisonment on unspecified “press-related charges”. The sentence was reduced to 1.5 years by the appeals court.

Ms.Zhila Baniyaghoub, an award-winning journalist and women’s right activist, was taken into custody at Evin prison on September 2, 2012 to serve the one-year imprisonment sentence imposed on her in June 2010 after she was convicted on charges of “spreading propaganda against the system” and “insulting the president”. The sentence, along with a 30-year ban from professional journalistic activities, was upheld on appeal in October of the same year. Ms. Baniyaghoub’s husband, economic journalist Mr.Bahman Ahmadi-Amou’i, has been serving a five-year prison sentence after being arrested on June 20, 2009 and convicted of “gathering and colluding with intent to harm national security”, “spreading propaganda against the system”, disrupting public security” and “insulting the president”. In mid-June 2012, when political prisoners in Evin prison’s Section 350 organised a ceremony to commemorate the anniversary of demise of the late political prisoner Mr. Hoda Saber, prison officials sent Mr. Ahmadi-Amou’i and several other prisoners to solitary confinement. He was subsequently banished to the remote Rajaishahr prison. There, he was insulted and confined to an isolation cell for nearly 20 days. He remains in the same prison, even though his sentence does not provide for ‘imprisonment in exile.’

TheObservatoryis gravely concerned at thisnew series ofarrests and detentions of human rights defenders, whichmerelyaimatsanctioning their legitimate human rightsactivities and peaceful exercise of their freedom of expression. It particularly fears for their physical and psychological integrity in a context of widespread acts of torture and ill-treatment sufferedby human rights defenders while in detention. Moregenerally,this ongoing repressive climatealsoaimsatintimidating and silencing allhuman rights defenders in Iran.

The Observatory therefore urges the Iranian authorities to immediately and unconditionally put an end to the judicial harassment of and drop all the charges against Ms. Shiva Nazarahari, Ms. Zhila Baniyaghoub and Messrs. Navid Khanjani, Hossein Ronaghi-Maleki, Issa Saharkhizand Bahman Ahmadi-Amou’i,and to guarantee their physical and psychological integrity under all circumstances. The Observatory more generally calls upon the authorities to release all human rights defenders arbitrarily detained and to conform to the United Nations Declaration on Human Rights Defenders, the Universal Declaration of Human Rights and international human rights instruments ratified by Iran.