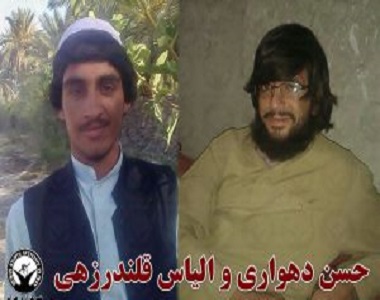 HRANA News Agency – Hassan Dehvari, 28 and Elias Qalandarzehi, 21, two Baluch citizens, have been sentenced to death on charge of Muharebe. They claim that they have been arrested and sentenced to death as hostages just because of other relatives or family member’s political activities to force them to return or stop their activities, like other Baluch prisoners. They claim that they have been torture despite their innocence and even when they reported to the judge about the torture, he laughed and said, “you deserve it”. The two prisoners in time of armed conflicts between IRIG and a number of members of a Baluch militant group were transferred from prison to the front of the house where the conflict was and those who were armed and resisted in the house, were the relatives of Hassan Dehvari and Elias Qalandarzehi who were threatened that if they would not give up, they would see the execution of the inmates in the same place.
According to the report of Human Rights Activists News Agency in Iran (HRANA) Hassan Dehvari, 28, son of Abdullah, married and father of 5, as well as Elias Qalandarzehi 21, married and father of a daughter, both used to live in Saravan. END_OF_DOCUMENT_TOKEN_TO_BE_REPLACED