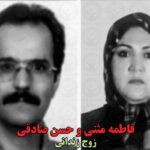 Human Rights Activists News Agency (HRANA)- A request for retrial for a married couple imprisoned on political grounds has been denied for the second time by Branch 33 of Iran’s Supreme Court.

Hassan Sadeghi and Fatemeh Mosana, who have been tortured and incarcerated multiple times over the past four decades since the Revolution, are currently serving 15-year prison sentences; Sadeghi in Karaj’s Rajai Shahr prison, and Mosana in Tehran’s Evin prison.

After being tortured by intelligence agents during an arrest, Sadeghi sustained eye injuries that have developed into secondary ailments, including glaucoma. His glaucoma-afflicted right eye may soon require surgery, but the advancement of his disease informs a poor prognosis. Though he has made an appointment with an ophthalmologist, he won’t be able to honor it: the prosecutor’s office refuses to issue Sadeghi the permit he needs to go there.

Sadeghi was first arrested in 1981 at the age of 16, and was tortured over the course of his six-year detention; the impact of multiple lashings ground a dent into his skull. Under psychological and physical duress, Sadeghi also developed an ulcer and gastrointestinal infection. Years later, gel insoles and orthopedic shoes help relieve the chronic foot pain caused by his torturers, who fractured his heel bone with repeated whips of a cable to the soles of his feet — yet the prosecutor’s office bars Sadeghi from even buying them himself.

Mosana, 41, was first arrested in 1980 at the age of 13. With her mother, she was charged with “Moharebeh” [enmity against God] and “Baqi” [rebellion] for membership in the opposition group MEK. Both served three years in prison; meanwhile, three of her brothers and a sister-in-law were executed for opposition activities.

Mosana suffered a leg injury while incarcerated in 2016 that required the application of a cast, a treatment that authorities delayed for two and a half months. After her complaints of chronic pain were ignored by prison staff, she was transferred to an outside medical facility where doctors diagnosed her with permanent tendon rupture.

Sadeghi was again arrested along with Mosana and his two children in February 2013 for commemorating his late father, an anti-regime activist. Authorities sealed Sadeghi’s home after the arrest and detained their 10-year-old daughter Fatemeh for three days. Their son Iman, 19 years old at the time, was in custody for a month and a half.

Sadeghi and Mosana spent a year behind bars before going free on bail. Judge Ahmadzadeh of Revolutionary Court Branch 26 would later order the couple to serve 15 years in prison and surrender their property, including their home and their shop. This sentence was later upheld in appeals court.

Mosana was detained September 30, 2015, to begin serving the 15-year sentence. Her husband was arrested in turn while visiting her in Evin prison on February 7, 2016. Their children, now aged 26 and 19, are in the care of their elderly grandmother.