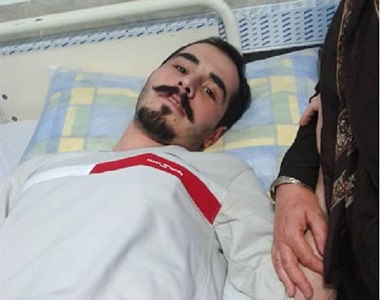 HRANA News Agency – Hossein Ronaghi’s family would again submit the request of the inability of tolerating punishment of this prisoner in Tehran prosecution office. Angina, kidney problems, swelling of the face, stomach bleeding, blood and eye infections, lung problems and respiratory problems, are the basis that the Ronaghi family has requested the issuance of the certificate of inability of tolerating punishment.
According to the report of Human Rights Activists News Agency (HRANA), Ahmad Ronaghi, his father, attended Tehran Prosecution Office on Saturday, March 5th, to follow up the furlough for Hussein or transferring him to the hospital, and went to meet him on Sunday. END_OF_DOCUMENT_TOKEN_TO_BE_REPLACED

HRANA News Agency – Deputy of Evin prison prevented Hossein Ronaghi to be sent to the Forensic department. He is still held in a harsh condition.
According to the report of Human Rights Activists News Agency in Iran (HRANA), Hossei Ronaghi Maleki, who just recently finished his hunger strike, was supposed to be sent to Forensic department on 8th March, but “Momeni”, deputy of Evin prison, prevented him from being transferred to Forensic. END_OF_DOCUMENT_TOKEN_TO_BE_REPLACED

HRANA News Agency – Hossein Ronaghi is in critical health condition after 18 days of being in hunger strike.
According to a report by Human Rights Activists News Agency (HRANA), Hossein Ronaghi the imprisoned weblogger in ward 350 of Evin prison who started hunger strike since August 9 in protest to postponing his kidney problem treatments and medical process, is in a critical health condition. END_OF_DOCUMENT_TOKEN_TO_BE_REPLACED

According to a report by Human Rights Activists News Agency (HRANA), on August 8, 2011, Hossein Ronaghi Maleki experienced bleeding due to a kidney infection and had to be hospitalized.However, IRGC interrogators transferred him back to Evin Prison on the same night despite his critical condition and the attending physician’s advice.

IRGC interrogators have demanded a repentance letter from Hossein Ronaghi Maleki accepting the charges against him and have announced that only under such circumstances, he will be given sick leave from prison.

While the prosecutor’s office in Tehran has accepted the request for sick leave, IRGC interrogators continue to prevent Hossein Ronaghi Maleki from leaving the prison and insist on receiving his repentance letter first.

Hossein Ronaghi Maleki has been sentenced to 15 years in prison.  He continues to deny all the charges against him.

Judge Peerabasi who presided over Hossein Ronaghi Maleki’s trial has also interfered with the process evaluating the request for sick leave and has played an important role to delay the order granting him time away from prison for medical care.

HRANA News Agency – Hossein Ronaghi Maleki, a human rights activist and a blogger, who was returned to prison shortly after his kidney operation, is experiencing excessive bleeding at the surgical site, and his condition is worrisome.

According to a report by Human Rights Activists News Agency (HRANA), on Saturday, May 7, 2011, Hossein Ronaghi Maleki had a kidney operation that lasted six hours.  Immediately after the operation, he was transferred from Shahid Hasheminejad Hospital to Evin prison where he remains right now without proper medical care and equipment.

The decision to return him to prison was made despite the attending physician’s advice who announced that his patient had to remain under doctor’s care for some time after the surgery.  This human rights activist is now in Evin prison without proper medication and care while suffering from bleeding at the surgical site.

While in prison, Hossein Ronaghi was diagnosed with kidney disease and due to lack of medical care and negligence of prison officials, one of his kidneys has lost 70 percent of its functionality, and the other one only functions 20 percent below normal.

Since Hossein Ronaghi was transferred to hospital for surgery, security agents tied up his hands and legs with chains and treated his father and physician badly.  In response, Hossein Ronaghi went on hunger strike for two days.

According to one of his doctors, it is likely that Hossein Ronaghi is also suffering from gallstones due to lack of medical care for his kidney disease and continuous use of pain medication.