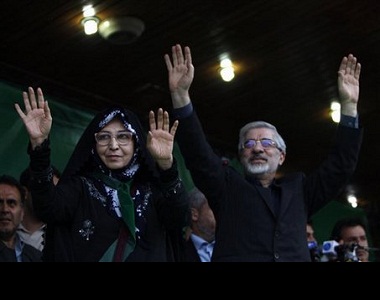 HRANA news Agency – After meeting their daughters on the 21st March 2013, Mir Hossein Mousavi and Zahra Rahnavard had no meeting or telephone contact with any of their family members.
According to a report published by the Kalameh website, the security forces not only don’t allow them to meet or call their daughters but also haven’t allowed Rahnavard to meet her mother. END_OF_DOCUMENT_TOKEN_TO_BE_REPLACED

HRANA News Agency– Total prevention of call contact between Mousavi and Rahnavard with their daughters is still continuing and these two besieged are not allowed to be informed about anything related to their children.
According to a report by Human Rights Activists News Agency (HRANA), quoted from Kalemeh website, Zahra Rahnavard confirmed on the call with her mother on last Tuesday that they are not allowed to have any contact with their daughters.
END_OF_DOCUMENT_TOKEN_TO_BE_REPLACED

HRANA News Agency – On Sunday February 3rd of 2013 the union activist Yasan Mosavi has been arrested and till now he has not contacted his family.

According to a report by Human Rights Activists News Agency (HRANA), Yasan Mousavi who is 29 years old, a union activist in Tehran market and one of active people in Mir Hossain Mousavi’s election campaign arrested at his home through security forces invasion. His parents have been hanged in 80s.

Security forces broke the door and invaded to his home, then searched all the house, took away his personal belongings such as photo camera, photo album, computer and after all arrested him.

“On Tuesday February 5th through a call from Etela’at they informed us that one month temporal detention verdict issued for Yasan and he is in Evin prison now.”, One of his relatives said to HRANA reporter.

“We have no information about his situation and his health, also the family is very concern”, His relative continued.

Yasan is the brother of Hooman Mousavi who was arrested after elections in 2009 and was in Evin prison for more than 2 years.