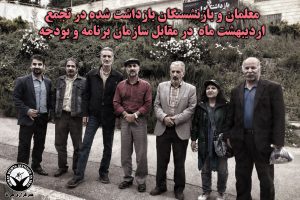 Six people arrested in a teachers’ demonstration on May 10th have been issued a suspended sentence of nine months imprisonment and 74 lashings, or the equivalent financial penalty, on charges of “disrupting public order by taking part in illegal gatherings” and “disobeying authorities serving their duty.” Their trial took place in Branch 1060 of the Second Criminal Court of Government Employees on September 5th.

All six took part in a May 10th gathering of teachers and retirees advocating in front of Iran’s Planning and Budgeting Organization against the privatization of the country’s education system, and for wages that would hoist them above the poverty line. Police attacks on the demonstrators led to injuries, hospitalizations, and eight arrests.

Arrestees were held in a security police detention house on Vozara street before being transported to Base Seven of the Criminal Investigation Department (CID) a few days later. They were finally taken in shackles and handcuffs to Evin prison, where they eventually accepted to post a bail of 500 million rials (approximately 12,000 USD) to await their trial.

Teachers’ union activist Mohammad Habibi, currently housed in Section 4 of Evin Prison, is a defendant on the same case. He was sentenced July 23rd to 10 years and six months in prison, 74 lashings, and a two-year ban on both civic activities and travel.

At trial, a judge offered freedom to the May 10th activists in exchange for their pledge to cease future involvement with labor activism. In defense of their right to stage and participate in peaceful gatherings, all reportedly refused.