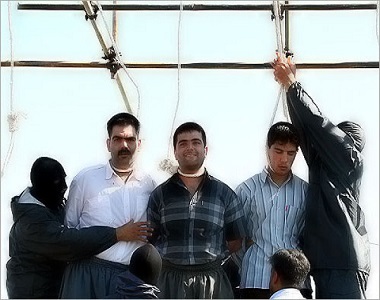 According to the report of Human Rights Activists News Agency (HRANA), four prisoners with the names of Seyed Hamid Hajian, Hossain Tootian Noosh, Mostafa Jamshidi and Mohsen Nasiri were executed by hanging in Karaj prison on Tuesday, January 19. END_OF_DOCUMENT_TOKEN_TO_BE_REPLACED

HRANA – On Wednesday, May 19, 2010, Mohammad Farajian, an Azerbaijani activist and elementary school teacher in Pars Abad, Moghan, was arrested after being summoned by the Pars Abad (Moghan) Intelligence Office.

The arrest of this Azerbaijan’s teacher comes after the arrests of two Azerbaijani journalists, Ramin Jabbari and Mostafa Jamshidi as well as Hafez Sardarpoor, Nader Azizi, Mahnaz Karimi and Mehdi Zeynali over the past few days. From these detainees, Mostafa Jamshidi and Mahnaz Karimi were released after one day of detention and the rest have been transferred to the Intelligence Office in Ardebil.