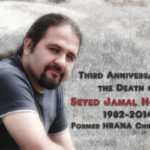 The decision to speak out may have cost Iranian human rights activist Seyed Jamal Hosseini his life. END_OF_DOCUMENT_TOKEN_TO_BE_REPLACED 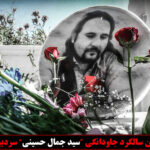 On the second anniversary of his death, we Remember Seyed Jamal Hosseini, HRANA’s former editor who devoted his whole life to help the victims of human rights’ violation in Iran: You can read more about him here.

The First Anniversary of Jamal Hosseini Was Held in Turkey 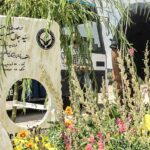 HRANA News Agency – The anniversary of Seyed Jamal Hosseini, former editor of HRANA and co-founder of Human Rights Activists in Iran was held by a number of political and human rights activists on his tomb in Turkey.

According to the report of Human Rights Activists News Agency in Iran (HRANA), a number of political and human rights activists gathered yesterday in the city of Nevshehir in Turkey to pay tribute to Seyed Jamal Hosseini. END_OF_DOCUMENT_TOKEN_TO_BE_REPLACED 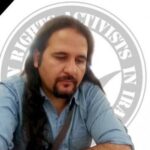 The body of Seyed Jamal Hosseini (Esfandiar Baharmas) had been found on August 5, 2014 at his home in Nevshehir in Turkey. Human Rights Activists in Iran had then in a statement stated that regarding the conditions there had to be investigations about his death which has been done by the Turkish authorities. END_OF_DOCUMENT_TOKEN_TO_BE_REPLACED

HRANA News Agency – On the afternoon of August 17th, 2014 a commemoration ceremony was held in the memory of Seyed Jamal Hosseini – Human Rights Activist- in Toronto, Canada.

Many Iranian artists took part in the ceremony as well. At 2 p.m. national songs were played by Arnoush Azrahimi, student activist and former political prisoner. Then Seyed Jamal Hosseini’s biography was read and afterwards Mr. Amir Mahim read some of his poems to the audience.

Then an art student of York University read some poems. The ceremony continued while Seyed Jamal Hosseini’s last interview about the condition of human rights in Iran and also HRANA’s activities was played.

At this ceremony, Mrs. Roya Araghi, political activist gave a speech and then a clip produced by Parsa Oliyaifar was played. Next speech was given by Setareh Hasanpoor, human rights activist.

Afterwards Hassan Zarezadeh Ardeshir, human rights activist and former political prisoner gave his speech. He criticized Canadian government because of not accepting Seyed Jamal Hosseini’s asylum request. He called for more attention on the condition of Iranian refugees. Another clip was played after his peech.

Siavash Bahman, Seyed Jamal Hosseini’s colleague, spoke about the experiences he had during the time he has been working together with Mr. Hosseini. He expressed his condolences and read the message of Mr. Hosseini’s family.

The participants also carried the pictures of imprisoned human rights activists and asked for their freedom. The ceremony was finished at 4 p.m.

A pictorial report of this ceremony is in the proceeding:

HRANA News Agency – On the afternoon of August 14th, 2014 a commemoration ceremony was held in the memory of Seyed Jamal Hosseini – Human Rights Activist- in Damavand Street, Tehran.

According to the report of Human Rights Activists News Agency (HRANA), on Thursday afternoon 14th of August, a commemoration ceremony was held in the memory of Seyed Jamal Hosseini founding member of Human Rights Activists in Iran and the former editor of HRANA . The ceremony took place in a hall located at Damavand Street in Tehran and Mr Hosseini’s families and friends attended this ceremony. END_OF_DOCUMENT_TOKEN_TO_BE_REPLACED 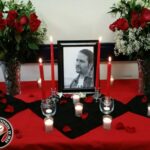 HRANA News Agency – A commemoration ceremony was held in the memory of Seyed Jamal Hosseini (Esfandiar Baharmast) founding member of Human Rights Activists in Iran and the former editor of HRANA on August 10th, 2014 by Iranian residents of the United States at George Washington University.

According to the report of Human Rights Activists News Agency (HRANA), this ceremony took place in his memory and to honor his devoted character and prolific life. Many political and social activists attended this commemoration. The ceremony opened with a guitar solo, played by a local artist, and continued with a speech by Dr. Kavian Milani – whom emceed the service.
Keyvan Rafiee, a former political prisoner and a colleague of Seyed Jamal Hosseini, spoke about Jamal’s life and dedication. He explained that Jamal grew up in a working class family and mentioned that he lost his uncle during the mass executions of political prisoners in the 1980s. Keyvan also said that Jamal had a sentimental and liable character towards the society and the environment he lived in. Addressing Jamal’s previous activities in Iran , Rafiee mentioned his activism for political prisoners and his key role in establishment and implementation of Human Rights Activists in Iran. Mr. Rafiee finished his speech by addressing the mysterious death of Mr Hosseini, “…And this is how the book of a human’s life, who devoted his short, but fruitful life, in saving many lives comes to an end. He was truly a symbol of pain and suffering of a generation and a nation. A truly selfless and free character, who spent many years working in non-profit
activities and his only possessions were a computer, a few pens, and paper while he was alive. The path he laid will be followed by many.”

The ceremony continued with Dr. Mohsen Sazegara’s speech. He briefly referred to the mysterious death of Mr. Hosseini, and moved on to the issues of Human Rights in Iran and contradictory claims of Iranian Government on this subject. Mr. Sazegara said that religion can only be accepted if it is conformable with humanity and human rights. This political activist also referred to theoretical challenges that Iranian government has been facing over the past few decades with regards to the human rights issues.

The commemoration ceremony continued with Babak Sabetian‘s violoin solo in memory of Mr Hosseini, followed by a video conference in which Behnaz – Mr. Hosseini‘s sister- expressed her gratitude on behalf of Mr. Hosseini’s family towards the guests and all those who provided support by any means to the family. Behnaz also wished that Mr. Hosseini could have got the attention he received now, while he was alive, and hoped for a world without any asylum seekers.

Mansour Osanlou, one of the leaders of Workers Movement of Iran, who travelled from New York, was the next speaker. He talked about his memories with Mr. Hosseini, and spoke about his memories and called the news agency ran under his guidance “courageous.” Mr. Osanlou also used a metaphor and mentioned Turkey as a “back yard” of the Ministry of Intelligence of the Islamic Republic of Iran, and requested that more consideration be given to political asylums.

The ceremony continued with Ms. Ladan Yazdian expressing her gratitude for the civil rights activities of Mr. Hosseini. Ms. Yazdian read a message sent by Mr. Faraz Saneie, researcher from Iranian section of Human Right Watch. In this letter, Mr. Saneie reminisced on his friendship with Mr. Hosseini and his characteristics.

The commemoration ceremony at George Washington University was continued with short memorable stories told by guests about Mr Hosseini. Kourosh Sehati, journalist and political activist, gave his account about the early days of Jamal’s asylum life in Turkey. Mr. Sehati said, “Jamal used to stay at home most of the time and deprived himself from basic joys of life, due to his devotion and his sense of responsibility towards his work.”

Mr. Behzad Mehrani, former prisoner, and human rights activist, also told a story from imprisonment. Mr. Mehrani said that Jamal’s activities were so effective and great that he had to endure the most difficult interrogations about his activities. He proceeded by stating that this could not happen unless Jamal’s activities were effective. Mr. Mehrani also read a letter from Seyed Mehdi Khodaei, a human rights activist, currently imprisoned. Mr. Khodaei who is serving his sentence, as a colleague of Mr. Hosseini at Evin Prison Ward 350, expressed his admiration for Mr. Jamal Hosseini and his bold role in Human Rights Activists in Iran. “…Jamal was attracted to light. His beliefs, words and deeds were unified. Jamal’s compassion was like a tree, which he raised with his love; its shadow was shelter for any human being who suffered, without any discrimination. We are confident that the light of hope, and the blessing of those human beings will
strengthen the roots of this strong tree, and we will witness its greater strength.

Ahmad Batebi, journalist and human rights activist, spoke at the ceremony, and told of his experiences with Mr. Hosseini. He concluded his speech by saying, “We have lost a great person.”

Later in the ceremony, a report on the mysterious death of Seyed Jamal Hosseini,which was published by Human Rights Activists in Iran, was read by Keyvan Rafiee.

Next, Ms. Roya Boroumand, representative of the Abdorrahman Boroumand Foundation, read a statement in which she expressed the foundation’s gratitude for Mr. Jamal Hosseini’s character and his voluntary activities on the issue of human rights. She added that the existence of people like Jamal Hosseini, and the organization he helped establish, are signs of dynamism within the new Iranian generation. Ms. Boroumand described Jamal as a great and responsible person.

On many occasions during the ceremony, poems were read from well-known poets such as Parvin Etesami, Molavi and Hamid Mosadegh. The famous song “Morghe Sahar,” was sang by one of the guests.

Ms. Mehrangiz Kar, lawyer and human rights activist, was the last speaker at the commemoration ceremony. Whilst she explained the current damages in Iranian civil society, she said that everyone can learn from Jamal Hosseini’s lifestyle. She concluded her speech with the following sentence, “The future of human rights is bright in Iran.”

The commemoration ceremony finished at 7:00 pm.

A pictorial report of this ceremony is in the proceeding and complementary reports and will be published soon. HRANA News Agency – The funeral of Seyed Jamal Hosseini, one of the founders and the editor of HRANA was held in Nevshehir city in Turkey.

According to the report of Human Rights Activists News Agency (HRANA), the funeral began at 9 o’clock at Gul bagcha Park in Nevshehir and continued at the main graveyard of the city. He was buried temporarily in Turkey and the participants placed flowers on his grave. END_OF_DOCUMENT_TOKEN_TO_BE_REPLACED

The condolence message of the political prisoners in Evin prison

HRANA News Agency – Some imprisoned human right activists at ward 350 of Evin prison, expressed their sorrows for sudden death of the senior member of Human Right Activists in Iran and the editor of HRANA.

According to the report of Human Rights Activists News Agency (HRANA), these prisoners have stated in their short message from the prison: END_OF_DOCUMENT_TOKEN_TO_BE_REPLACED

The condolence message of the political prisoners in Zahedan

HRANA News Agency- After the mysterious death of Seyed Jamal Hosseini, the Editor-in-chief of HRANA News Agency in Turkey; a group of political prisoners at Zahedan Central Prison sent a collective condolence message and asked for further independent investigations on his death.

According to the report of Human Rights Activists News Agency (HRANA), a group of Ideological-prisoners at Zahedan Central Prison sent a collective condolence message to Iranian people and all Human Right Activists after the mysterious death of Seyed Jamal Hosseini and asked Turkish government to arrange a thorough and independent inquiry over this incident and to inform the public opinion with the outcome. END_OF_DOCUMENT_TOKEN_TO_BE_REPLACED