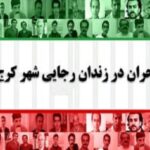 According to the report of Human Rights Activists News Agency (HRANA), 53 political-security prisoners detained in hall 12 of Rajai Shahr prison in Karaj were transferred to a hall which was previously rebuilt and developed by security forces, with the presence of a large number of prison guards, without prior notice on July 30, 2017. The hall is equipped with a large number of surveillance cameras and surveillance devices, as well as the shields that separate it from the rest of the prison.The families of these prisoners in the wake of their concern about the fate of their relatives, had referred to the judicial authorities who are responsible for this issue but these efforts had not resulted. END_OF_DOCUMENT_TOKEN_TO_BE_REPLACED