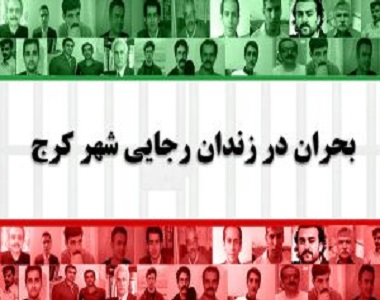 HRANA News Agency – An estimated number of 50 political prisoners held in Rajai Shahr prison in Karaj have been transferred to a new and security hall in recent weeks. There are the deprivations which have been imposed on prisoners in this hall where even the toilets are equipped with CCTV cameras. The situation has prompted political prisoners to protest. At least 16 prisoners are on hunger strike in a critical condition.
According to the report of Human Rights Activists News Agency (HRANA), 53 political-security prisoners detained in hall 12 of Rajai Shahr prison in Karaj were transferred to a hall which was previously rebuilt and developed by security forces, with the presence of a large number of prison guards, without prior notice on July 30, 2017. The hall is equipped with a large number of surveillance cameras and surveillance devices, as well as the shields that separate it from the rest of the prison.The families of these prisoners in the wake of their concern about the fate of their relatives, had referred to the judicial authorities who are responsible for this issue but these efforts had not resulted. END_OF_DOCUMENT_TOKEN_TO_BE_REPLACED

HRANA News Agency – Vahid Sayad Nasiri, political prisoner of Evin prison, has started a hunger strike, in protest to violation of separation of prisoners based on their crimes.

According to the report of Human Rights Activists News Agency (HRANA), Vahid Sayad Nasiri, political prisoner of section 4 of Evin prison is on hunger strike since February 15. END_OF_DOCUMENT_TOKEN_TO_BE_REPLACED

HRANA News Agency – Vahid Sayad Nasiri, political prisoner in ward 4 of Evin prison, has been imprisoned contrary to the rule of separation of prisoners based on their crimes, and despite the passage of more than a month of holding the Court of Appeal hearing, he has not received the verdict yet.
According to the report of Human Rights Activists News Agency in Iran (HRANA), Vahid Sayad Nasiri has had a hearing in Branch 54 of Court of Appeal presided by Judge Babaei, on December 14, 2016, but this political prisoner has not received his verdict yet. END_OF_DOCUMENT_TOKEN_TO_BE_REPLACED