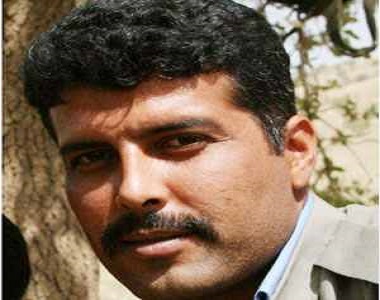 HRANA News Agency – Sherko Maarefi the Kurdish political prisoner in Saqqez prison who has been sentenced to death is still in uncertainty and in danger of imminent execution.

According to the report of Human Rights Activists News Agency (HRANA), Sherko Maarefi the Kurdish political prisoner who has been sentenced to death by Saqqez revolutionary court is in uncertainty.  END_OF_DOCUMENT_TOKEN_TO_BE_REPLACED

HRANA News Agency – The dossier of Sherko Ma’arefi, political prisoner in Saqqez prison who has been sentenced to death, is still at forgiveness and pardon committee in Sanandaj without any respond.

According to a report by Human Rights Activists News Agency (HRANA), Sherko Ma’arefi the political prisoner in Saqqez prison who has sentenced to death by revolutionary court, is in danger of execution while he is waiting for the respond of forgiveness and pardon committee in Sanandaj to his dossier.

This political prisoner from Baneh who is 30 years old, has arrested on September 30th of 2008 and has been sentenced to death by first branch Saqqez revolutionary court on charge of enmity against God.

After he appealed his verdict, branch 4 of the appealed of the province confirmed the verdict. one year later, in October of 2009 the supreme court confirmed the death verdict and since that time Sherko Ma’arefi is in danger of the execution enforcement.

Then his dossier sent to the provincial forgiveness and pardon committee and this committee refused to respond to Ma’arefi’s family till now.

Also Sherko Ma’arefi did hunger strike in protest to his uncertain situation in March of 2012 and informed the court and prison officials through a letter.