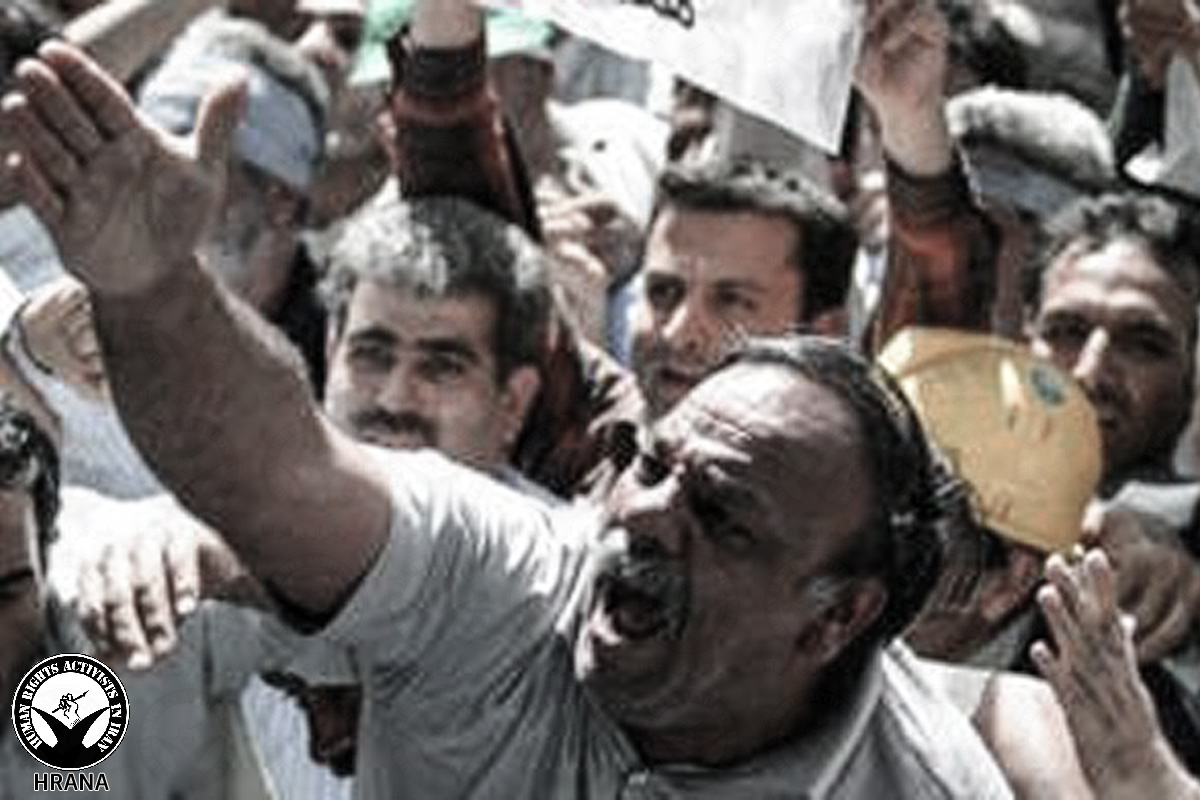 HRANA reports that workers’ representatives sought to conclude the strike under pressure from authorities, but workers were dogged in their resolution to strike until the company agrees to meet one of the workers’ chief demands: to re-nationalize.

When HTSA was sold to the private sector in early 2016, it caused a string of delays in worker payments that have yet to be resolved.

Workers have declared strike multiple times to demand payment of back wages, which authorities from HTSA and the city of Shush have committed but thus far failed to deliver.

In recent months, worker anger was only exacerbated by news that HTSA sections have been sold off to outside companies, reportedly founded by close associates of major HTSA shareholders.

Human Rights Activists News Agency (HRANA) – Worker protests continued to rock the southwestern Iranian province of Khuzestan on August 25. Workers of the Iran National Steel Industrial Group (INSIG) in the provincial center of Ahvaz and those of the Haft Tapeh Sugarcane Agro-Business (HTSA) organized protest gatherings to push their demands.

Speaking on the meeting that HTSA union and representatives had with authorities of Shush county and Khuzestan province, Esmayil Bakhshi, a representative of the workers, said: “I feel sorry for the Provincial Governor who sees us as the enemy. He wasn’t even willing to leave his office to see why the workers are on strike. When we ask for an independent workers’ council to be formed it is so that workers’ direct supervision on state managers would prevent such people from becoming managers and disrespecting workers.”

Nonpayment of wages, the outsourcing of some HTSA departments and other changes in the factory are the major issues expressed by the workers.

HRANA had previously reported on the HTSA strikes.

On August 25th, a group of INSIG workers in Ahvaz marched in front of the provincial governor’s office in the city and asked for their back wages to be paid and for the right to form a workers council.

The workers organized a protest march and chanted slogans including “Our country is full of thieves; nowhere in the world is like this”.

“INSIG wages and benefits have not been paid from March to July and our efforts to follow up have been useless,” one of the workers told the state-run news agency, IRNA. “INSIG has currently zero production. We have been promised that raw material necessary for production will be supplied before the end of the year [Persian calendar year, ending on March 21, 2019.] but there is no hope and no positive perspective. The authorities are not accepting responsibility for paying wages and sending the workers back to work.”

INSIG consists of a range of companies and employs about 4,000 workers who have not been paid for a few months. Their protests began on Saturday, August 18th asking for payment of four months of wages and the supplying of raw material.

Bank Melli is the current owner of the industrial complex housing the Iran National Steel Industrial Group (INSIG) of Ahvaz and Haft Tapeh Sugarcane Agro-Business (HTSA). Workers from these companies gathered to demand back pay and the right to form independent councils.

August 12th marked the third consecutive day of protests, which workers said they will continue until the company meets their demands.

INSIG’s CEO Kasra Ghafoori voiced to the media his company’s response to the crisis. “I sympathize with the INSIG workers,” he told Iran Labour News Agency (ILNA). “It’s hard to live when you haven’t been paid for four months, but INSIG’s raw materials will be provided by next week.”

INSIG is among a group of companies founded by Amir Mansoor-Aria’s Ahvaz-based investment group. After Mansoor-Aria was displaced from management due to criminal convictions, the Iranian Judiciary assumed control of the company until its recent privatization.

All told, INSIG companies employ about 4,000 workers, none of which have been paid in the past few months. Worker frustrations culminated in a new wave of protests on Saturday, August 18th.

The workers of Haft Tapeh Sugarcane Agro-Business (HTSA) continued to strike in front of factory management offices on the fourth day of consecutive protests.

Employees across company sections joined in a chant of “You’re a disgrace, Ghafari”, asking for dismissal of the sector’s manager.

The workers demanded the company resolve insurance payments, provide 1,500-day contracts for workers, and communicate transparently on the recent outsourcing of one of HTSA’s sections and the company’s uncertain future.

One of the workers stated that the company has yet to deliver on their promises to secure worker contracts and benefits.

HRANA reported that INSIG and HTSA protests were still active as of Monday, August 20th.

For the fifth day in a row, workers of the Haft Tapeh Sugarcane Agro-Business (HTSA) gathered in protest in front of the company’s security department.

Payment of delayed wages and stopping the company’s breaking up and privatization are among the demands made by the workers during this protest. The workers are also demanding “intervention by high-ranking provincial authorities on the question of the company’s management,” HTSA’s trade union has said.

Esmayil Bakhshi, the workers’ representative, gave a speech in today’s gathering and spoke of workers that have self-immolated under the pressure of authorities.

“To solve this problem of the workers, they were sent to different departments for a while,” Bakhshi said. “but it turned out that they wanted to fire them. After they chose self-immolation, instead of solving their problems, they asked them why did they want to burn themselves and ruin the company’s reputation?”

“The security department managers have lost or changed their real mission for years now,” Bakhshi said. “The real mission of this department should be to create a safe and secure space for workers for them to do their work in utmost security. For years, however, they’ve tried their best to disrupt the security of workers.”

The worker representative then spoke about the new manager of the security department who has a past in the police force.

Esmayil Bakhshi addressed the employers at the end of his speech: “We are ready for negotiations. The only solution is for you to talk to us so that we can solve the problems.”

The workers of HTSA have repeatedly organized strikes and gatherings to protest the contract conditions, worker expulsions, wage delays and privatization of the company assets.

On Thursday, August 23rd, workers of the Haft Tapeh Sugarcane Agro-Business (HTSA) in southwestern Iran started the sixth day of their strike. A number of authorities, including the agriculture minister, came to visit the workers and follow up on their grievances.

In addition to the Minister of Agriculture, the Governor General of the Khuzestan province and a representative of the Shush County governor’s office met with the workers.

Before the meeting, HTSA workers had addressed an open letter to the authorities.

“The community of Haft Tape workers will stand behind their valiant representatives, absolutely and to the last breath. If they are met with any harm or accusation, all workers of this company will back their representatives and will not stop supporting them under any circumstances,” the letter said.

“Our gatherings have been aimed at demanding our rights and asking for help from the respected authorities. Our demands from the beginning have been aimed at driving out the capitalists from this region and bringing the company back into public ownership. We have been working in a very calm environment, away from threats, violence and anti-government slogans. It is now the turn of the respected authorities of the county, the province and the country to give what is the right of the devout and hardworking workers of this land and to put an end to years of injustice that has brought suffering to the workers, their families and the people of this region,” the letter continued.

“We will follow up on the grievances of the retired workers and payment of their pensions,” Agriculture Minister Mahmood Hojatti said.